A day in the life of a janitor 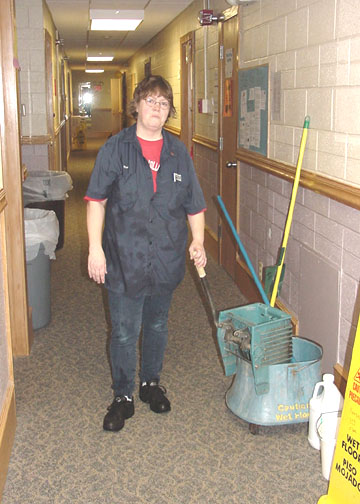 Welcome to the not-so-glamorous life of a Simpson custodian. They start each day 15 minutes earlier than any student has to go to class and don’t quit until 4:30 p.m.

Besides regular maintenance and cleaning of the bathrooms and hallways, college custodians have to deal with a unique set of obstacles.

“Someone did something in the shower,” custodian Bonnie Johnson said. “They didn’t barf or pee or throw food in there. Some of the guys had told me there was a mess in there. Do I have to say it?”

A student had defecated in the shower at Barker Hall where Johnson works.

Students told Johnson to leave the mess in shower because they didn’t want her to have to clean it up, she said.

“I went in there and said, ‘Oh,’ put on gloves and just cleaned it up,” Johnson said. “I just figured that if it was me I would appreciate someone helping me.”

The Barker incident was about six months ago and Johnson said nothing like that has happened since.

While the men’s dorm sounds like a gross place, the women’s can be just as bad.

“Sometimes girls will get a little careless and leave pads in the showers,” custodian Tina Edwards said. “It’s like they just take them off, drop it on the floor and forget about it.”

Besides surprises in the showers, Edwards also has to deal with clogged toilets in Kresge Hall.

“There’ll be tampons that get flushed down the toilet and clog them up,” Edwards said.

Like Johnson, Edwards chooses to just “pitch in do it” when it comes to messes.

“Usually I just take a plunger and try to get it out myself,” Edwards said.

“If I can do it myself I just do it. That makes it a lot easier and faster.”

Despite disgusting occurrences, both Edwards and Johnson feel that the students do the best they can to help out.

“Yeah, sometimes they throw toilet paper on the floor and I think that they could pick that up themselves,” Edwards said. “But the bathrooms are looking pretty good.”

Barker residents are especially polite to Johnson, she said.

“They all say hi to me when they see me in the hallways,” Johnson said. “One boy calls me ‘Ma’am’ all the time. I tell him that he can call me Bonnie and he says, ‘Yes ma’am.’ If they like you the boys try to help you out. We all get along pretty good over there. I love working at Barker.”

Johnson has been working at Barker for about a year, but before that she worked at what she calls Mildred’s House, otherwise known as College Hall.

“I call it that and everybody looks at me like, ‘What?,'” Johnson said. “I don’t believe in that haunting though. I tell everybody that’s why I stopped working there; because she wouldn’t come out and talk to me.”

Besides picking up after college students, Edwards also has two children at home.

“My kids are lazy,” Edwards said. “It’s hard to get them motivated because they’re not getting paid to clean. At least I get paid for it here.”