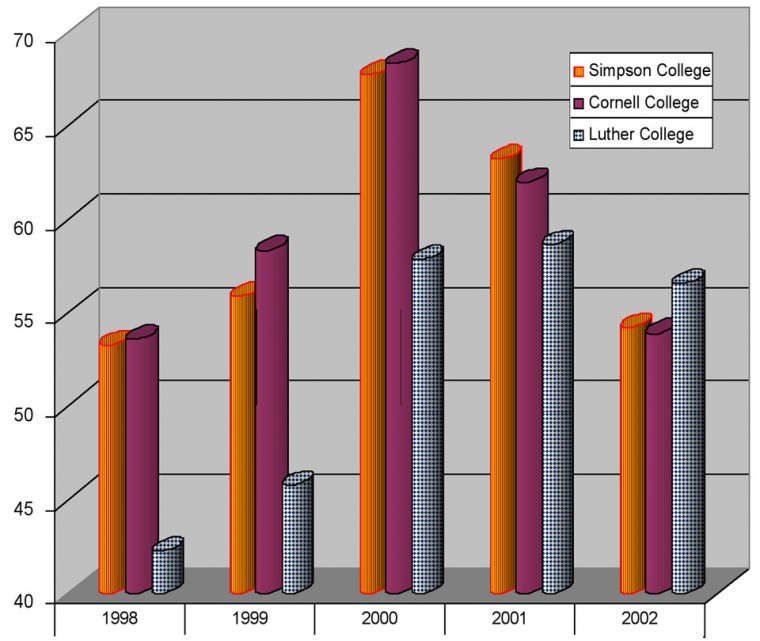 A weak market, poor performance by one fund manager and a drop in endowment donations helped trigger a $1,433 increase in next year’s tuition for Simpson students and a 14.1 percent loss in value of the endowment fund.

“One of the things [the loss in the endowment funds] does is put more pressure on us to increase tuition,” said President R. Kevin LaGree. A Feb. 4 mass e-mail made students aware of the increase in tuition. However, according to Ken Birkenholtz, vice president for business and finance, scholarships will not be affected by the loss.

The 8.7 percent increase in tuition for the 2003-04 academic year may seem steep. However, tuition at state schools will increase by an average of 17.6 percent.

Simpson’s loss in endowment compares to an average loss of 6.4 percent for colleges with comparable endowments. A recent article in The Des Moines Register highlighted Simpson’s investment loss as the largest in the state. While this is true of last year’s investments, Simpson gained more than other Iowa colleges in the previous three years.

According to LaGree’s speech to the faculty in a meeting on Feb. 4, Simpson’s endowment moved from sixth in the state, among peer private colleges, to fourth about five years ago.

The college’s endowment is a large portion of money invested for long-term income and used to cover short-term and recurring expenses, such as scholarships and large projects. When the investments do well, the additional earnings are reinvested to create a larger capital base for the college.

Using an average in this way helps to prevent wild fluctuations in the amount of money available for endowment spending.

“We’re putting more money into the marketing department and the admissions office,” said LaGree. “We also have increased funding in athletics because it is a key part of recruiting students.”

Other projects include the new Division of Adult Learning campus in Ankeny, hiring a web content manager and increasing debt service for renovations completed in the residence halls. Also, according to LaGree, budget cuts in both maintenance and technology from the 2001-02 academic year will be restored next year.

“If you look at the history of investments in the United States over 100 years, equity [stock] has outperformed everything else over that period of time,” said LaGree.

The investment subcommittee will next meet in March. LaGree sits on the committee along with nine members of the board of trustees.

“They continue to evaluate the investment strategy and I think they make sound decisions,” said LaGree.

“We’re probably a little heavy there right now because of the drop in the equity market,” said Birkenholtz.

According to Birkenholtz, Simpson fired fund manager Roger King of King Investment Advisors, who handled the investments in the value-oriented small to mid-cap market.

This investment style is composed of companies who have a generally lower capitalization (under $2 billion), are possibly undervalued and are expected to grow slowly.

Birkenholtz said King seemed to experience a style drift over the last few years, moving toward companies who have the potential to grow fast but are not necessarily undervalued.

Ariel Mutual Funds has been selected to replace King as the fund advisor for this market segment.

In addition to the drop in value of the endowment, endowment donations are down and the outlook for donations doesn’t look promising.

“When the market goes down, so does philanthropy,” said Vice President for College Advancement Dennis Hunt. “It is not the ideal time to seek major gifts when the economy is in the condition that it is in right now.”

Hunt said that the donations fluctuate from year to year, but “if you’re talking about significant impact, you’ve got to do that with very large gifts from one year to the next.”

Birkenholtz said that there are no plans to cut any current services on campus because of the loss.