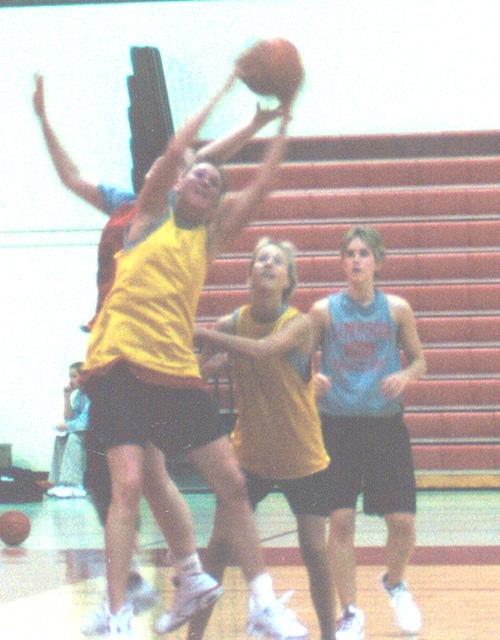 The women’s basketball team is first in the Iowa Conference with a two game lead.

“Our number one goal was to win the conference,” said Head Coach Brian Niemuth. “And we’re right on track.”

The Storm will have to meet again with Loras on Feb. 21 and then finish conference play on Feb. 22 against Dubuque.

Simpson will have home court advantage for both of these games. Only one win is needed for the women to secure the Iowa Conference title.

“The team plays well together and I think that is the basis of our success,” said Niemuth. “We usually rotate 11 players in a game. With that many people playing, personal numbers are going to be lower. They sacrifice their personal goals and play unselfish.”

Postseason play for the Storm will begin on Feb. 25 with IIAC tournament quarterfinals. There is a good chance that the team will play all of its IIAC tournament games in Indianola as long as it continues to win.

In preparation for the postseason, Niemuth has been having his team view the last five games as playoff games to build intensity.

Senior guard Sara Sonderman has seen a difference in the team during the most recent games.

“We usually play according to the score,” said Sonderman. “If we’re up by 15, we aren’t a real intense team. Now we are focusing on effort and intensity at all times, no matter what the score is.”

The players have some goals of their own to help the team be successful in postseason play.

Senior guard Amy Van Pelt is going to focus on cutting down her turnovers and improve on her assists. “I also really want to work on getting more defensive boards,” said Van Pelt.

“I’m going to do whatever I need to do to help the team win,” said senior forward Christy Pierick. “Whether it’s assisting or scoring, as long as we win. I also want to really keep things going for the seniors.”

There are seven seniors on the team and Niemuth wants them to “go out in style.”

“The seniors have been an instrumental part in this winning program and I want them to have every opportunity to make this season their best season,” said Niemuth.

“This has been one of the strongest teams I’ve been apart of,” said Pierick. “The chemistry is so strong and the morale is so high.”