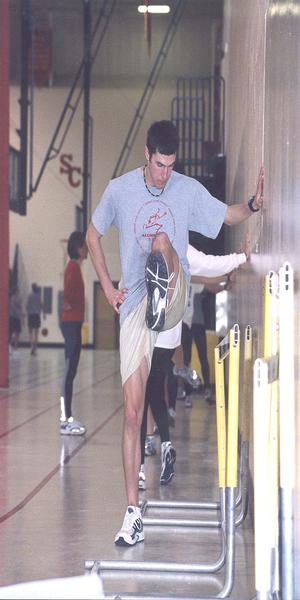 The Simpson men’s and women’s track teams have set off on their indoor schedule with goals being set and accomplished early in the season and much promise left ahead.

The first meet of the season was held at Central College on Jan. 24. The men’s team took off with an eager start to achieving its goals for the season as the team finished first at the Cornell Quad with 150 points on Feb. 1.

“For the men, our goal is to win a meet and we did that. For both sides, we want to increase our scores,” said Head Coach Tim Byers.

Finishing first for the storm were: Ross Parker in the men’s shot put, Clay Stoddard in men’s pole vault, Joel Shenfield with a 3,000 meter run, and Jen Wendt finished first in the women’s 1,000-meter run.

The indoor track season will see six more meets before heading outdoors. The indoor season culminates with the NCAA National Championships on March 14-15.

“We are trying to improve ourselves from last year. We want to be more competitive when the outdoor season first starts on March 29,” said senior Tracie Whitney.

The indoor track season consists of nine meets during the season this year cumulating with the NCAA National Championships on March 14-15 in Colby, New York.

Some athletes may heavily anticipate the outdoor season as the challenges of competing indoors can be rather taxing.

The indoor track is only 200 meters long inside, compared with the normal 400-meter outdoor track. This causes sharper turns inside because of a much shorter distance of the track.

“It is a lot harder on our left foot,” said Whitney.

But the indoor season also comes with its opportunities.

The indoor meets include several events exclusive to indoor competition, such as the 600-meter. But the more traditional competitions, such as long jump, shot put, high jump and running events such as the 200 or 400-meter dash, are not left behind.

The next meet for the men and women’s indoor track team is at the Nebraska Wesleyan Invite on Feb. 14th in Lincoln, Nebraska. >