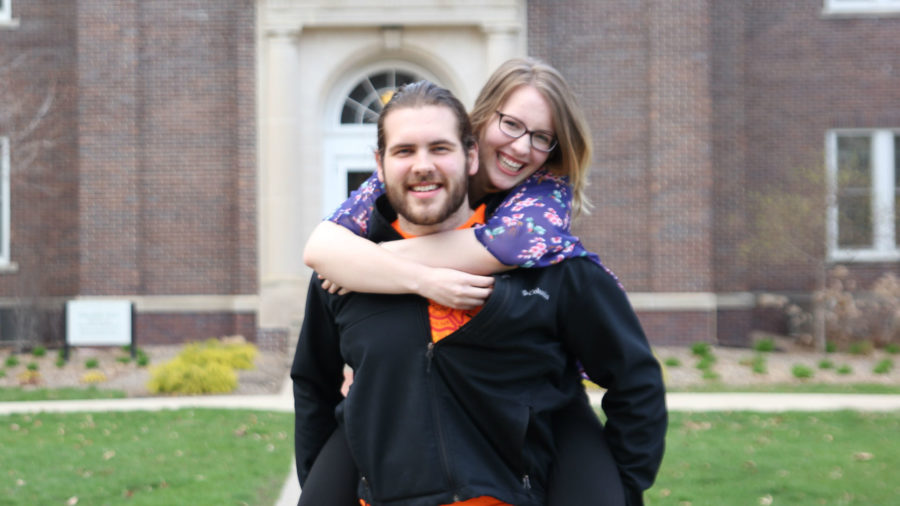 For most college students, visiting siblings means a trip home. For others, finding family requires only a walk across campus.

Junior Blake Willadsen is accompanied by his younger sister Kaylee, who is in her first year of college at Simpson. Although Blake says his sister is in a “different world” at school, he believes attending college together has strengthened their relationship.

“We aren’t the same people at all,” Blake said. “She studies music, and I’m off in sports and business, but when you look at it, we get along better than ever because of that, I think.”

Blake said Kaylee makes frequent visits to his apartment and even recalls a spring break trip that they went on together along with some of his cross country teammates.

“Somehow her friends have managed to cross over into my friend group, so I do see her quite a bit more than expected,” Blake said. “I guess that’s kind of the nice thing about the way that Simpson has worked out, is that we’re going to see each other either way, if we try to or not.”

Kaylee admitted that Blake was a valuable resource for her while she was adjusting to life at Simpson.

“It’s nice to have that support system on campus because everyone gets homesick from time to time and just having a piece of that here makes it a lot easier,” Kaylee said. “Transitioning to college is a tough thing to do but it was a lot simpler when I had my brother’s dorm, and I could go whenever I needed to talk.”

Liana Halder reflected similarly on the impact her older brother Trevor has had on her Simpson experience.

“It’s pretty comforting knowing that if anything were to happen, he would be there,” Liana said. “He was there for a breakup; a pretty bad one, and I was there for one of his as well. Our sibling is bond is very unique.”

While in high school, Liana quickly became familiar with Simpson by visiting Trevor and attending his recitals and opera performances.

“I didn’t even apply to any other colleges,” Liana said. “I got to see the good, the bad and the ugly before I even arrived, so I knew exactly what to expect.”

Liana admits that she doesn’t get to see Trevor as much as she’d like because of their busy schedules, but described a unique kind of communication that comes with sharing a college experience.

“We have that unspoken understanding,” Liana said. “Even though we don’t see each other every day, you know the other person’s schedule. It’s kind of nice to know, ‘Oh, he’s doing all of these things, so it’s going to be a rough week for him.’”

Liana mentioned that she believes that she and Trevor would spend more time together if they were the same sex.

The Loge brothers confirm her theory. Good friends from early on, Teig Loge says that college has strengthened his relationship with his younger brother Tre even further.

“We want to spend time together,” Teig said. “There weren’t many kids our age around where we grew up. We had friends at school and stuff but not really in our community, so we were kind of forced to be friends.”

Teig said that his close relationship with his brother is beneficial and both brothers claim that despite all the time they spend together, arguments rarely occur.

“We play a lot of racquetball together, plus it’s always nice to be able to take turns driving home,” Teig said. “First semester we actually took a Spanish class together and I think we learned the material better that we would have otherwise.”

Tre enjoys that he gets to spend more time with his brother now that they are living in the same place.

“We’re closer now than when I was in high school and he was in college,” Tre said. “Now there’s more of an option to hang out with each other whereas before it was kind of hard being 45 minutes away.”

Whether they’re spending time together every day or crossing paths on the way to class, having a brother or sister close by can be a very important part of a college experience.

“If you’re already close going into college, you’ll get closer, and vice versa,” Blake said. “It’s just like anyone else on campus; you’ll see them all the time no matter what. So don’t just do it for the scholarship.”