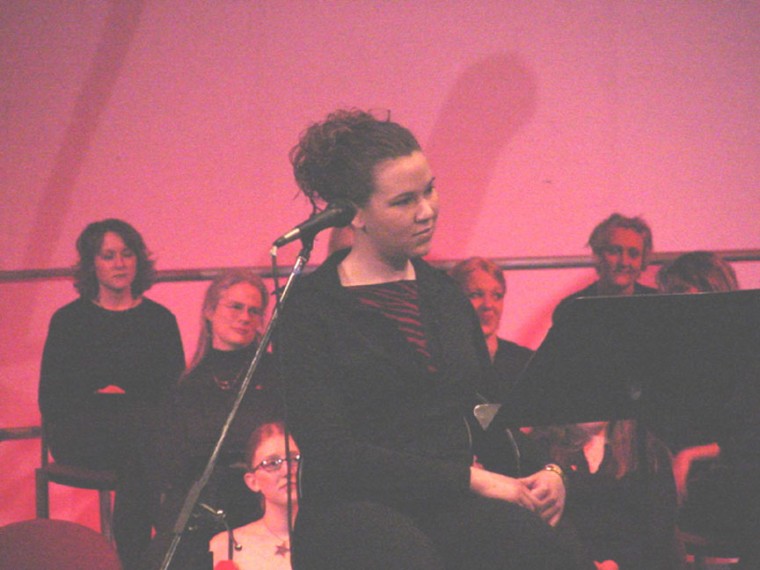 This story is the first part of a three-part series celebrating Women’s History Month. The Simpsonian has decided to look at women’s history with a new spin: the history that women are creating each day. By looking at issues that Simpson women are currently encountering and then looking at the broader gender issues that surround us, The Simpsonian hopes to highlight the ways that women are transcending the past, by embracing the world on their own terms. In short, we want to let the community know that women are making a difference-at Simpson and around the world.

Simspon’s first-ever production of “The Vagina Monologues,” in correspondence with V-day activities, yielded more than $6,500 and close to 20 tubs full of clothing for the Warren County Domestic Violence Coalition.

The money, which was raised through a combination of concessions, ticket sales, donations, sponsorships, silent auctions and Sophia’s sale of chocolate vaginas, is the largest single donation ever given the WCDVC.

“I am just amazed and impressed,” said Ruth Engelbart, chairperson of the WCDVC. “When I took this position three years ago we had a budget of $1,200. With this donation, our budget is now more than $20,000.”

Engelbart said that the money would hopefully be used to fund an advocate for Warren County. Ultimately, the WCDVC would like to have a shelter for victims of domestic abuse in Indianola.

“I think that it is not only the money that was raised, but the message was so important,” said Engelbart. “I saw the performance on Thursday and it was so well done.

I am 52 years old and I went with my sister, who is 62. We are from a different era and even though we are not necessarily comfortable with talking about those issues, it was so great to see this performance really educating people and talking about so many different issues and making it okay to talk about things like abuse, rape and body image.”

Jennifer Ross Nostrala, producer of Simpson’s production of the monologues and chair of the division of fine and performing arts, expressed her pride in not only the production, but also the entire community.

“This really revealed the support on the Simpson campus and the greater Indianola community for women and ending violence,” said Nostrala. “I think that this was really a life altering experience for a number of people.”

One of those people was Aimee McCabe, who organized the show at Simpson and both acted in and directed the performance. McCabe graduated in December and spent her time here this semester working on the performance as her senior project for theater.

“I have never been more proud of this college,” said McCabe. “We had heard from so many other similar colleges that were having such a difficult time with their administrations, or gaining support.

We had no problems here and that is just proof of how supportive the community is here at Simpson.”

McCabe said she did receive a lot of raised eyebrows when she told people that the goal was to raise $6,000 for the WCDVC.

“When I came out of the performance on Friday and saw our V poster overflowing with hearts [indicating that the goal had been exceeded], I actually started crying,” said McCabe. “I really cannot remember being more proud or happy in my life.”

CoryAnne Harrigan, assistant professor of English who read a monologue in Simpson’s production, was moved by McCabe’s deep commitment to the production.

“Aimee is sincere to the point of welling up with tears during rehearsal,” said Harrigan. “She is so dedicated to this project-it’s really inspiring.”

McCabe attributes much of her dedication to Eve Ensler, the creator of “The Vagina Monologues” and one of the founders of V-Day. McCabe and Nostrala attended an empowerment workshop that dealt with producing the monologues this summer, where they worked with Ensler.

“Eve is such an intoxicating woman,” said McCabe. “You couldn’t help but take some of her passion with you. She is so bold, passionate, striking and strong; she’s my hero.

She really made me believe that changing the world is acceptable and realistic.”

Changing our corner of the world is just what McCabe and everyone involved with “The Vagina Monologues” did.

“At the end of the performance, while I was still on stage, I heard this woman in the audience say ‘they have no idea of the impact that they are having and they never will’,” said McCabe. “I think that she was right.”

“We dream about the things that we can do with this money to help the women and children of this community,” said Engelbart.