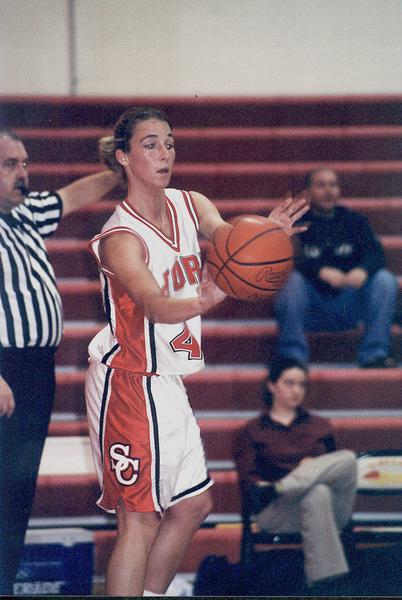 In high school, athletes had the opportunity to play multiple sports while attending smaller high schools.

The fast-paced life of a college student makes balancing two sports more difficult than the task ever was in high school. Most student-athletes choose to focus on one sport that they excel in and enjoy the most.

But several Simpson athletes just couldn’t make the sacrifice. Two Storm women are transitioning into the spring softball season after spending the past five months on the basketball court.

Amanda Pilcher, a senior from Fort Dodge , saw the end to basketball season on Saturday and is ready to hit the softball field for the rest of the school year as a catcher for the Storm.

“The coaches have worked with me and have cooperated with this. The only time I miss softball practice is when I have a basketball game,” said Pilcher.

Her days at Simpson are somewhat altered from her three-sport days at Iowa Central Community College. Pilcher played volleyball, basketball and softball.

She said she never had to deal with softball and basketball conflicting with each other during high school because softball was during the summer.

Junior Megan Kelso is from Hoover High School in Des Moines and is a guard on the women’s basketball team. During softball, Megan is either pitching or running in the outfield.

“I don’t think it is very hard. The coaches are good about it and they have talked about this situation. Basketball is my priority,” said Kelso.

Kelso played the same sports in high school as she does now. “In high school, the sport seasons didn’t run as long. College is more serious and the seasons are longer,” said Kelso.

Both of these women have spent many hours at practices on the court with basketball practices running from 4-6 p.m. daily and softball from 6-8 p.m.

Head softball coach Henry Christowski said that basketball is the priority for these two women until the season is completely over.

“Whatever sport is in season is the one that they are committed to,” said Christowski.

Women’s head basketball coach Brian Niemuth said that he doesn’t mind that they are out for both sports.

“I ask that they don’t practice on game days,” said Niemuth.

Niemuth also said that they could do both practices each day as long as they don’t wear themselves out. He said that the women need to maintain a mental focus on basketball, since it’s the sport in season right now.

This is the reason why softball has been having some late night practices. Some nights the practices have run from 8 to 10 p.m. or 9:30 until 11:30 p.m.

The spring sports are not the primary sport yet, so they get what they can for gym times. Spring sports such as softball have to wait its turn until the seasons change.