A president is worth at least a thousand words 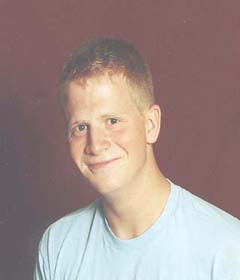 Carrying out his father’s agenda that has lain dormant for the last 12 years, Bush announced that Saddam Hussein and his sons have 48 hours to leave Iraq or face the military consequences of their actions. Translation = get the #*%@ out of Iraq or Operation Desert Storm will look like two seven-year-old boys playing “commando” in the sandbox.

“This is not a question of authority, it’s a question of will.” On this point, I agree with our Commander in Chief. Many nations – notably France and Germany – are reluctant to support a US led coalition into Iraq to dethrone Saddam because the leaders of said countries are afraid. That’s right, afraid; afraid of losing their seats of inscrutable power from which they condone the actions of “The Great White Satan,” yet breathe sighs of relief when the fighting is over and the US emerges victorious, because they can then claim long time allegiances and reap the distributive benefits of economic gains without shouldering any of the burden.

Gerhard Shröder won his German election on a party platform of anti-US sentiment, including opposing further military action in Iraq. Jacque Chirac is afraid of being deposed. When roughly 80percent of your population opposes war and you go ahead and ignore them, there’s a good chance you’re going to lose your position as Prime Minister. It is for this reason that I applaud Tony Blair for having the gusto to support the United States when practically all other democratic nations stood against Bush and America. Tony Blair will not keep his office because of his choice, but I acknowledge him as the gutsiest British Prime Minister since Winston Churchill for standing by Bush to remove Saddam when the rest of democratic Europe was too apprehensive to do so.

France has an ulterior motive at stake if the US goes into Iraq, because France is Iraq’s third largest importer of oil. If France doesn’t support the US when our military goes in and defeats Saddam’s armies, it isn’t going to enjoy the same economic benefits as they did before. France has a long history of trade with Iraq (spare parts for manufacturing, petroleum, etc.) and a US-installed and run government under the direction of one of our generals is not going to be remotely as friendly to a France that didn’t pay its way but still demanded its benefits. If you don’t ante up, you can’t win any chips.

Bush went on to declare that the United States of America has the sovereign authority to use power to defend its national security. If Saddam is allowed to continue his buildup/disarmament magic show, he will be a much larger threat than he is now. Appeasement does not work, as we learned from the “Lesson of Munich.” To compare Saddam to Hitler is foolish; he doesn’t have the same cognitive capacity to achieve what the Austrian-born blindingly successful dictator did. That withstanding, he is still a legitimate threat that will only increase with further delays.

The largest danger from Saddam that I can see is that he has never disclosed what happened to the anthrax that we know for a fact that he possessed. When faced with potential annihilation, why would anyone not come clean with the only information that can prevent destruction? Because he still has substantial quantities of it and most likely others like it, and doesn’t want to give up his trump card.

Bush did state, “The US did nothing to invite this threat.” It is here that I throw my objection hat into the ring. Statisticians estimate that, as a result of United States imposed economic sanctions on Iraq, at least 500,000 Iraqi children have perished since the Gulf War. Half a million dead children seems to constitute legitimate reason for friction with the United States. I’m not justifying Saddam’s position, nor am I condoning his actions. I am simply disagreeing with Bush on taking a position of the innocent watchdog, violently agitated by upstart punk kids.

In fairness, we have given Saddam as many chances to disarm as is courteously possible while still maintaining the auspices of peace. Bush even gave Saddam’s troops every chance they could possibly hope for, saying, “Do not fight for a dying regime.” This is a brilliant tactical move on Dubya’s part, trying to minimize the amount of resistance that he will face when he marches armed troops into Iraq from Kuwait, and drastically reducing the level of potential casualties.

The threat of terrorism is real. Anti-US and Allies sentiment is strong around the world. We will have at least one small and one large terrorist attack on the United States and/or its Allies as a direct result of the US invasion of Iraq. I hope I’m wrong, but I fear that it’s inevitable. Terrorist organizations like al-Qeada feel that a large-scale attack in which they kill many innocent pro-American lives is justified because of the amount of casualties that the United States will most likely inflict in Iraq. Terrorist organizations like the aforementioned consider themselves as defenders of the Muslim world, and will retaliate when one of their own is attacked, even if they don’t like Saddam any more than we do.

One can expect to see one of three situations pan out with the war in Iraq.

1) Saddam and company abdicate the throne and step down peacefully (insert sarcastic face of doubt here).

2) An officer, most likely a general in the Republican Guard, attempts a military coup against Saddam and succeeds, immediately declaring himself and his regime friendly to the US to prevent the destruction of his newly acquired power. The invasion would not have to proceed as our primary objective is to remove Saddam.

3) Saddam stays stubborn, the US goes to war and dominates the Iraqi infrastructure, military, and the Republican guard, upon which we set up an American General as the new leader until a stable democratic Iraq is established. There’s about a 50/50 chance that we won’t go to war, but if we do I entrust all of our armed forces to fight a practically American-only war, then to you soldiers I say keep your wits about you and your training fresh.