Raising the bar in Indianola–The Zoo 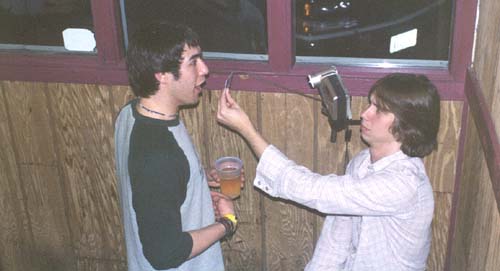 by Sara Cowden and Mike Mook

The Wall of Shame, six dollars all-you-can-drink Thursdays, and wall-to-wall Simpson students are all trademarks of the Zoo, a place where you can find just about any of your drinking buddies.

“The Zoo is like our ‘Cheers,'” said senior Michael Proctor. “You can always count on finding good friends and good deals.”

The Zoo opened its doors to Indianola and the Simpson community in August 1995.

“Shannon [Stafford] and I used to come to Indianola to go out and we’d ask people, ‘Where’s the college bar?”’ said Darrel Augustson, owner of the Zoo.

Stafford had bar experience and Augustson had graduated with a business degree, so the duo decided to open a place of their own. According to Augustson, he and Stafford agreed on the name when Augustson recalled that a fraternity brother had once said that a good name for a bar would be the Zoo.

Stafford sold out to Augustson in December 2002.

“After 20 years in the bar business, he was just ready to try something new,” said Augustson.

The Zoo has 10 employees, many of them Simpson students. Junior A.J. Lenz has worked there for a little over a year.

“Working at the Zoo fits my schedule perfectly,” said Lenz. “And, of course, it is a fun environment. If someone says that they’re going up to the bar, everyone assumes it’s the Zoo.”

The Zoo has five standard beers on tap: Budweiser, Bud Light, Miller Light, Guinness and Bass. Augustson said he hopes to have five or six new lines put in after graduation for more imported and specialty beers.

The main bar is located on the upper level of the Zoo, but there is a smaller service bar downstairs. Augustson said he usually only opens it for special occasions, but that he would like to try to utilize it more next fall.

In going along with its laid back atmosphere, even to the point where some students have been known to wear their pajamas for a night out, the Zoo keeps any sort of fighting to a minimum.

“We don’t really have a problem with fighting,” said Augustson. “I think it has to do with the caliber of individuals who go to Simpson. If somebody does get worked up, we usually know about it early enough to get them outside before anything happens.”

According to Augustson, he plans to install a digital recording system to tape everything that goes on, upstairs and down. This way if there is ever any question about an individual, it can be sorted out more easily.

Augustson said the Zoo has never lost its liquor license and bartenders are good at using their own discretion when it comes to those who have had too much to drink.

“I have never had any problems with people mouthing off or getting angry with me,” said Lenz. “There is a strong tie between everyone who works there and we help each other out.”

Beginning for May Term, the Zoo will extend its $6 all-you-can-drink beer special to Sunday through Thursday nights and offer $2.75 long island ice teas and sex on the beach mixed drinks. According to Augustson, the bar may go through eight to 10 kegs of beer on a given Thursday night.

“Beer is my drink of choice,” said senior Tommy Williams. “So I am a big fan of the $6 deals. When it’s one of those nights, everyone is ready for a fun and crazy time at the Zoo. It kind of makes your eyes get wide and excited.”

Augustson said that the key to running a successful bar is keeping an open mind and giving people what they are asking for.

“You can change the whole mood of the bar with just the music,” said Augustson. “We usually wait until a little later in the night to play dance music, until people have had a chance to loosen up.”

And, loosen up, yes they do.

“Some of the craziest things I have seen here are girls flashing for beads and on occasion we’ve had couples who have forgotten that we have video cameras set up downstairs, so that has been interesting,” said Augustson. “Dancing on the bar is allowed-just as long as you have permission. That way we can clear you some space and watch out for you.”

According to Augustson, the biggest bar tab of one person, one night that he can recall was over $200. He said that for the most part, Simpson students are good tippers. Ten percent is considered average.

Augustson is considering a Zoo safe-ride shuttle bus to get students back and forth from campus.

“A shuttle bus would be great, especially during the winter,” said Williams. “Usually my car gets parked outside the Zoo on Thursday nights and I don’t get it picked up again until Monday.”

Augustson said about 75 percent of his total customers are Simpson students and that naturally it goes down a little during the summer months.

“The Zoo is classic,” said Proctor. “It’s a cultural norm for Simpson.”