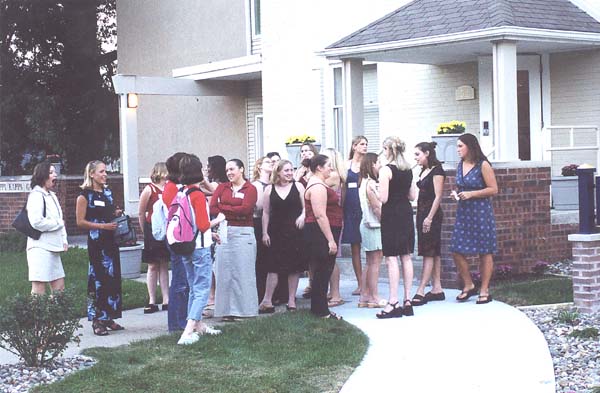 A decision was recently made by the current Panhellenic Council to add another day to fall recruitment activities with hopes of raising the number of Greek women for next fall’s Formal Recruitment.

The decision was finalized on March 23 at a Panhellenic meeting. Formal Recruitment will now be a four-day event instead of only three.

“The idea was brought up last year, but it had little support,” said Nicole Modianos-Stumo, Greek and Panhellenic advisor. “It was proposed again this year at a round table discussion.”

Several members from each of the women’s sororities were in attendance at the meeting when the decision was made to add an extra day.

“I asked the representatives to go back to their respective chapters and discuss the idea,” said Modianos-Stumo. “The idea to change the recruitment process is due to the declining percentage of Greek women in the Simpson Community.”

Each chapter had very strong viewpoints on the subject. The decision to change recruitment will affect all Greek chapters, as they will need to alter their Recruitment parties.

“We need to do something; what we are doing now isn’t working,” said Modianos-Stumo. “The support from the women’s sororities and their willingness to do new things is essential in building the Greek community.”

Panhellenic Council members say that the added day is strongly supported by the Greek community.

Sarah Meyer, Panhellenic recruitment chair, has been very involved in the upcoming changes.

“There have been several ideas thrown around as to how to make the recruitment process better and how to attract more women,” said Meyer. “Adding a day was the most supported idea among all of the women involved.”

“The added day will help all chapters equally,” said Modianos-Stumo. “It is designed so that the women going through recruitment will be able to attend all of the chapters for two nights. This will enable the chapters, as well as new potential members to get to know each other better.”

Meyer and Modianos-Stumo both believe that this change will only improve future recruitment success.

“I have great confidence that this may be a great way to help the new members become informed,” said Meyer.