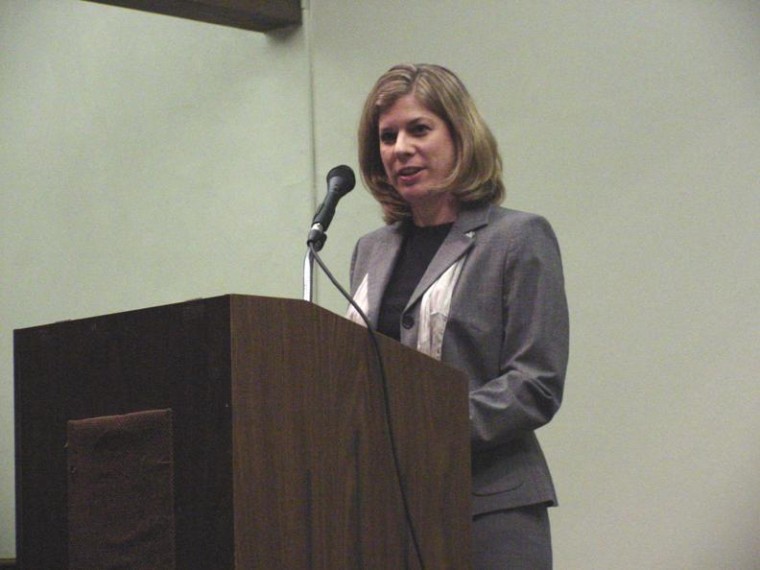 Willmsen graduated from Simpson with degrees in journalism and Spanish. After college, she went on to work for several newspapers in Iowa, including the Northwest Iowa Review.

She now works for the Seattle Times as an investigative reporter. Before accepting a job with Seattle Times, Willmsen worked for the Dayton (Ohio) Daily News where she did her investigative work and was also a finalist for the Pulitzer last year.

“Mainstream journalism got old for me. I became fascinated with unearthing information that people don’t know about,” said Willmsen. “Being a watchdog is where my strength is. I want to keep the government, or any other institution, in-line.”

Willmsen’s interest in journalism was sparked by her curious nature. Her passion for investigative journalism grew even stronger after her first story. She said that she likes to write stories that often produce or provoke changes in others. Her drive to find the answers to unsolved mysteries is really strong.

During her visit at Simpson, Willmsen had the opportunity to speak to several classes about her experiences as an investigative reporter.

She spoke of her nominated collaborative work, written for the Dayton Daily News, for the Pulitzer Prize last year titled “The Foreign Game.” This work is a series on foreign athletes who come to the United States illegally to play for high schools and colleges.

The Seattle Times story that most recently qualified Willmsen as a Pulitzer finalist this spring was a story on the snipers, Muhammad and Malvo who had connections to the Seattle and Tacoma areas.

Willmsen spoke on the struggles of being a reporter. “Sometimes you move a lot and you end up losing or gaining friends in the process,” said Willmsen. “Sometimes you’d start getting comfortable in one place and then you realize that you have to move.”

According to Willmsen, investigative journalism is all roadblocks, but you just have to find your way around. “You just need to keep in mind that it is not a one-way street,” said Willmsen. “You have to fight tooth and nail for information.”

She also mentioned several factors that might help a journalist become successful in their stories:

According to Willmsen all four of these are crucial in investigative journalism.

Another factor that she emphasized was on the importance of knowing the laws of communication and the rights that journalists have to certain kinds of information.

During her speech on the era of print, Willmsen expressed concern for newspapers. She feels that newspapers are losing their readership to broadcast media and the Internet.

Willmsen said that some media use this convergence as a means of saving costs and that they have no journalistic interest in the matter at all.

Some students were in awe of Willmsen’s knowledge of journalism. Sophomore Shawna McChurch said, “I thought that she was interesting and she had a lot of information that you don’t normally pick-up until you’re in the field for quite a while.”

Willmsen’s visit to Simpson left some students with something to ponder, as far as future of print journalism is concerned.

For junior Melanie Long, Willmsen’s speech on the future of print journalism had an amazing thought-provoking impact. “Newspapers are such an important aspect of journalism. The very thought of that aspect being almost gone, saddens me,” she said.