Local band makes good–albums, that is 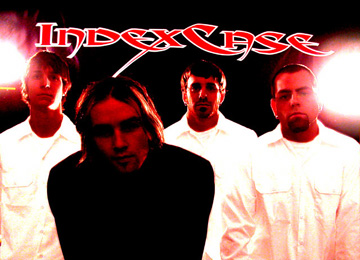 Iowa was just another state on the map, a word that invoked images of corn fields and farms when uttered.

That all changed when a band by the name of Slipknot emerged from Des Moines and took the world by storm.

It’s only a matter of time before it strikes full force.

This storm is a band called Index Case that hails from Indianola, Iowa. They are well known and have amassed quite a following around their Midwest community, but Iowa will not hold them for much longer.

Index Case will soon be sweeping across the country.

They recently signed a deal with No Name/Elektra Records, home to bands such as Mudvayne and Hatebreed, and will begin work on their national debut sometime in October.

Index Case has recorded 3 major discs prior to their soon-to-be national debut.

Projecting forth a unique brand of metal music, the appropriately titled “Birth” was only the beginning.

Index Case improved upon “Birth” and showed no signs of slowing down with the release of their sophomore album, “Glass.”

Index Case takes it to the next level with yet another self-produced album, “The Weak and the Wounded.” This third, full-length album begins with an eerie piano intro called “The Weak.”

The pace immediately picks up as they blast into “The Wounded” with lead vocalist Joe Ansley screaming, “We live in the weak and the wounded.” Jordan Spence’s rapid drum beats provide a pounding backdrop to Joe’s screams and the haunting guitar crunch of Josh Parker and bassist Korey Birkenholtz.

Haunting and dark is just how to describe this album, which is full of feeling and emotion. A prime example is the track “Hope is the Most Beautiful Lie,” which contains the lyrics “We’ve all had one final chance/Hold onto your violence/Pour your sand in the hour glass/And listen to the violins.”

Ansley does not limit himself to just screaming.

He also adds other elements such as an almost brooding, poetic verse at times. He does just that at the end of the track “Sincere.” It has a speech-like feel which ends with “Who’s got the gun now?” before breaking into an aggressive rage to finish the song.

The final track of the CD, “Thisism,” is a track that creates and builds suspense, ending with the thump-thump of a beating heart and a familiar sound in rural Iowa– cows mooing.

Who’s got the gun now? Index Case has a cannon and will soon be ready to fire.

Look out for Index Case at Hairy Mary’s in Des Moines on Saturday, Sept. 13 as they perform one last show before heading out to California to begin work on their national debut. Cost will be $2 at the door.

For more information on Index Case, head over to www.indexcase.com.