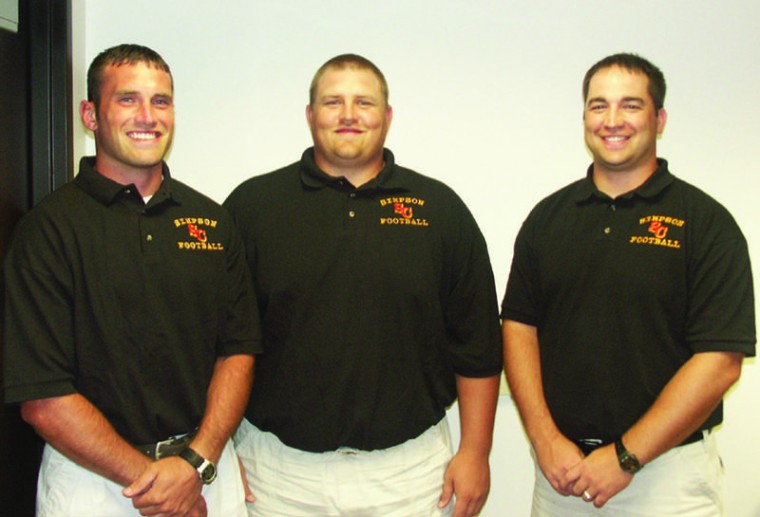 As football frenzy starts to arrive on many college campuses across the nation, three new assistant coaches will be on the sidelines for the Storm.

Ferguson played football for the Storm from 1997-2000 while lettering four times, receiving Academic All-Conference twice and having 189 tackles during his four years at Simpson.

“I thought it was a great opportunity for me to come back to Simpson,” said Ferguson. Ferguson also said that he loves to work with young student-athletes and coach. Ferguson said that his primary goal was to have the Storm defense as one of the top in the conference.

Andy Mitchel replaces Derek Wharton as the teams’ offensive coordinator. Mitchel was the wide receiver coach at UW-Platteville from 2001-2002 for the Pioneers. While at UW-Platteville, Mitchel and UW-Platteville head coach, Mike Emendorfer co-wrote a book on the spread offense and it was published this past summer.

Mitchel played four years at Hanover College as a wide receiver. Mitchel ranks in the top ten for pass receptions in Panther football history. Hanover College made two NCAA Division III appearances going 35-5 in his career as a starter.

“With the winning tradition (here at Simpson), I thought it was a great opportunity,” said Mitchel. He also said that there are different coaches that influenced him into becoming a coach.

Clint Head is the third hiring of the off-season. Head replaces Myles Easter as offensive line coach and working with the strength and conditioning program here at Simpson. For the past two years, Head has been serving part-time on the Storm football squad.

Head said that the Storm has the potential to be good but like all football teams, needs a little fine-tuning.

The Storm begin the season on September 6, at home against Washington University of St. Louis at 1 p.m.