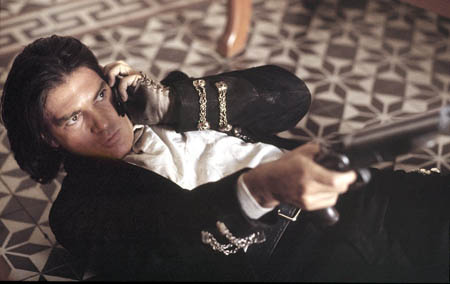 “Once Upon a Time in Mexico” encompasses a horribly complex and illogical plot, ridiculously good-looking women and a complete lack of good sense.

But the movie is no siesta.

“Mexico,” directed by Robert Rodriguez, completes the late Sergio Leone’s “Tamale Western” trilogy. El Mariachi (Antonio Banderas) is out to save the president of Mexico.

Coincidentally, the assassin, Barillo (William Defoe) is also the man that killed his wife and kid.

El Mariachi is joined by Central Intelligence Agency agent Sands (Johnny Depp) and a few other characters whose presence is questionable.

El Mariachi, the protagonist, is no gringo.

He is in touch with a deep musical side that drives him artistically, as well as giving him zen-like reflexes when shooting time comes around.

El Mariachi is notorious for his guitar case filled with weapons and the built in flame-thrower.

“Mexico” lures the viewer early with shear actor might. The film takes many twists and turns, but always seems to come back to CIA agent Sands and his wholesome dark humor that completely steals the show.

Sands truly does, as stated in the movie, become a Mexi’can’, rather than a Mexi’can’t’.

But “Mexico” isn’t entirely dependant on its excellent cast. What the movie lacks in substance, it is entirely compensated for with fun. “Mexico” has its own style with a hilarious degree of wit and dynamic action scenes that are as incredible as they are illegitimate.

Rodriguez also captures an intense, raw sexuality of Mexico in each of its characters and stories. It spellbinds, and though one may yearn to look away, it is almost impossible.

Also delightful is the amount of Spanish used.

It’s a great movie to take a girl to, guys. Especially if you’re taking Spanish and want to impress her with your own qualified translations of what the characters are saying.

The movie climaxes at a reasonable time that sees the evil Barillo’s cartel approaching the Mexican President’s palace. See the movie if you want to know what happens next.

One of the greatest devices used in the picture are the flashbacks.

The death of El Mariachi’s wife and kid still linger in his mind.

He mentally reminisces about what happened to his wife and kid. The flashbacks are given to the audience in small bites so the final flash provides shock.

And yes ladies, if that’s not enough, Enrique Iglesias is in the movie.

Iglesias and his side kick, whose name isn’t ever really revealed, show up late for a few laughs.

Iglesias simply can’t act and each of his lines are almost painful to listen to.

But, he does succeed in stealing a few Mexican beauty’s hearts while using some extremely profane language.

So if you’re looking for a rich, wholesome movie to contemplate different thoughts on, “Once Upon a Time in Mexico” isn’t for you.

But, if you just want to buckle in and go for a nice ride while burning a few bucks with a girl, “Mexico” is definitely worth it.