A tradition of excellence 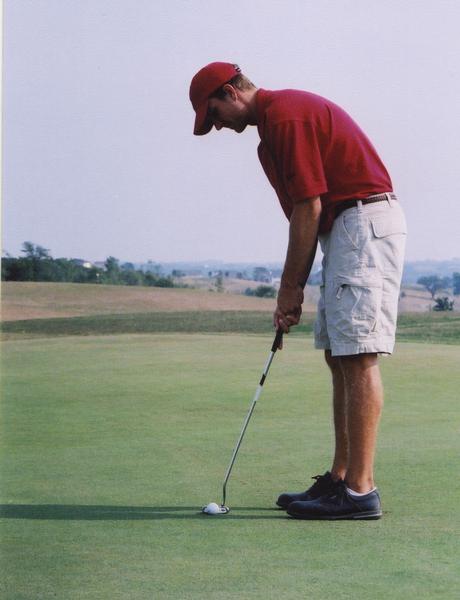 Their goal is to win it again.

“We battle every week to be number one.”

Darrah is in his fifteenth year of coaching women’s golf, and has had a long range of success and tradition.

He has been named Iowa Conference Women’s Golf Coach of the Year nine times.

Since Darrah has been coaching, Simpson has placed in three National Tournaments and won eight Iowa Conference titles.

He has also coached four All-American golfers while with the Storm.

This season is no exception for the team.

They won the Mt. Mercy Cropper Invitation for the fourth year in a row shooting a 322 to beat Wartburg by one stroke.

Darrah was pleased with the 322 score because teams that shoot 320 or below are competitive at the national level.

“Ideally, all the girls should be shooting in the 70’s to get us to the National Tournament,” said Darrah. “We are capable of shooting those scores, we just need to all get it together at the same time.”

The Storm has a good balance this year with five upperclassmen and five underclassmen.

“It’s hard to find girls in Iowa to play golf,” said Darrah. “Iowa does not have a great level of women’s golf.”

Darrah said that the intense individual pressure and responsibility turn many people away from golf.

“The seniors are great leaders, ” said Darrah. “And the freshman have a had a very positive impact on the team,”

Freshman Jessica Harvey has definitely impacted the team. Harvey tied for medalist honors at the Mt. Mercy Invitational on Sept. 5.

“My main fold this year was to just contribute to the team the best I could,” said Harvey. “I didn’t think it was even possible that I would be a medalist at any of the tournaments.”

Senior Senta Willenborg is a good example of senior leadership.

Willenborg was named the Iowa Conference Women’s Athlete of the week for the week of Aug. 31.

She also tied for fourth at the Coe Invitational on Sept. 6.

“I want us to get first at as many tournaments as we can. Being a senior, I realize that there is not a next year to do it better,” said Willenborg. “My goal this year is to help the team out as much as I can and make it to the national tournament.”

Willenborg also wants to be a leader for the underclassman.

“It’s important to me to show the younger girls the ropes and keep the tradition going,” Willenborg said.