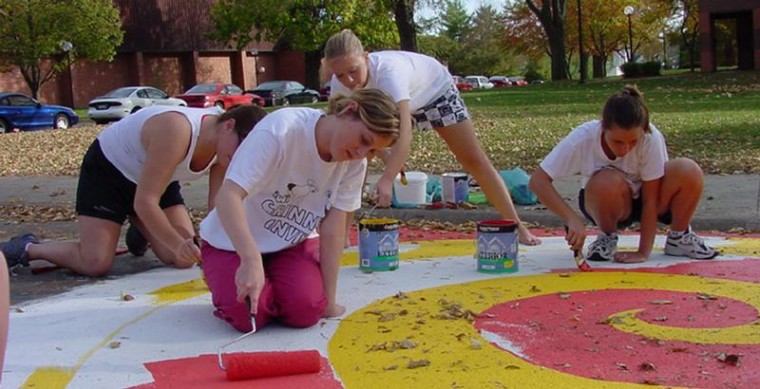 Last Sunday, students joined together with their correspondingresidence halls to paint the streets of Simpson. This event markedthe beginning of the many activities that would follow Homecomingweek.

The theme this year is “Crazy Go Nuts.” A committee of Simpsonstudents organized Homecoming week and all the activities. Inaddition to the events planned, the classes of 1983, 1988, 1993 and1998 will be holding special class reunions during Homecomingweekend.

Monday night was the official kick off of Homecoming 2003.

The skit competition will be held 8 p.m. Thursday in Great Hall.Various organizations signed up to perform in the competition andhave been practicing throughout the week. Skits will be judged oncreativity, audience reaction, use of props and costumes andrelativity to the theme.

Still to come are the Olympic events held Friday at 4:30 p.m. onintramural field. These events include tug of war, human pyramid,egg toss, obstacle courses and a fluffy marshmallow-eatingcontest.

Another activity to look for is Yell Like Hell. The turn out forYell Like Hell has been very large in the past.

“I’ve been told that Yell Like Hell is the best part ofHomecoming, so I am really looking forward to going to that,”freshman Hannah Packard said.

Rounding out the week is the football game against Buena Vista.The game is Saturday at 1 p.m. at Buxton Stadium.

After the game, both the men’s and women’s soccer teams willtake on Cornell. The women’s game begins at 5:30 p.m., followed bythe men’s match at 7 p.m.