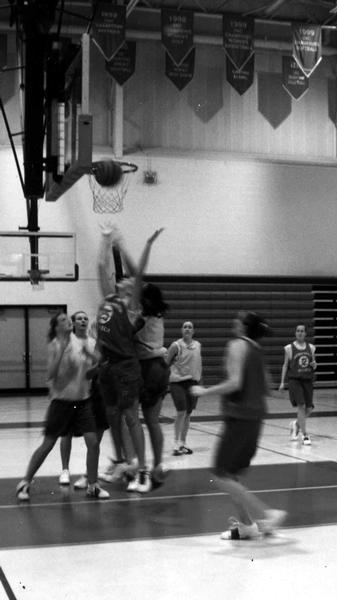 The 2003 Iowa Conference Women’s Basketball Champions are backin action and ready to defend the title.

After loosing seven seniors, the Storm will have to work hardthis year in order to defend the conference title.

“We are a much younger team this year, but we’re working hard todefend the title,” said junior captain Ashley Bogaards.

Head coach Brian Niemuth agrees that this will be a rebuildingyear for the Storm and he’s anxious to see what the team developsin to.

The 28-member team only has seven upperclassmen. Many of theyounger players will be looked upon to step up.

Niemuth wants to make sure the team is consistently gettingbetter and that the younger players are getting experience.

Along with the team’s youth and lack of experience, the teamalso does not have a lot of height. But Niemuth doesn’t see this asa major challenge for the team.

“We have a quick athletic team,” said Niemuth. “We will use thatto our advantage and be capable of putting lots of pressure on theball.”

Niemuth also wants to instill in his players the importance ofhaving the ball and taking care of it.

As far as winning the IIAC championship for a second straightyear, Simpson is just as much in the running as any other team.

According to Niemuth, several other IIAC teams lost a number ofsenior players last year as well.

Team unity is also a factor to the team’s success.

The women’s basketball season is long and the team spends a lotof time together. Bogaards compares the team relationship to afamily.

“We go out for team suppers and the long bus rides give us timeto bond,” said Bogaards.

Much of the team togetherness is spent at practice.

Official practice began Oct. 15, but the team has been togetherconditioning since they returned to school.

The season opener is now fast approaching. The Storm will openwith a home game against Waldorf College on Saturday, Nov. 22.