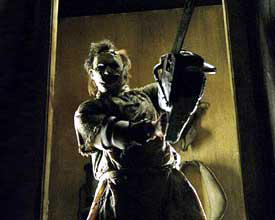 Why remake a classic film?

Two main reasons: Give a new generation a taste of the greatnessthat came before or to cash in on a fading franchise.

Guess which one this is.

Touted as “based on a true story,” “Texas Chainsaw Massacre”opens with the supposed crime-scene videos of the real massacre.Too bad the end credits give it away: “Based on a screenplay by KimHenkel and Tobe Hooper.” Hooper directed the original 1974″Massacre” and is credited as a co-producer on this effort. Thisdirectorial debut for Marcus Nispel, however, slips a gear on itspowertool. The movie strays from the grainy documentary style ofthe original, relying on gore and creepy angles to scare instead ofrealistic terror.

But why would a maniac intent on using the skin of his victimsto make suits use a chain saw to kill them, you ask? Wouldn’t usinga chainsaw tear the skin? Plot hole? What?

Kemper (Eric Balfour) is picked off first after venturing toofar inside a creepy house to look for a phone. The rule from “RockyHorror Picture Show” can be applied here-creepy old houses, likecastles, have monsters, not phones.

Andy, played by Mike Vogel, is the brave one. If this gang wereScooby Doo and friends, he would be Freddy.

The know-it-all Morgan, played by Jonathan Tucker, is asannoying as that stupid “Yeah…whateva” craze from “My UnitedStates of Whatever.” Yet he is the only one who has any commonsense-when you find mutilated dolls in a creepy old mill after agirl has shot herself in your van, it’s probably best to go.

For those who thought ultra low rise jeans were a moderninvention, think again. Erin (Jessica Biel) and Pepper (EricaLeershen) prove this wrong.

Of course, the sprinklers have to be turned on at everypossibility. And, of course, Biel has to be wearing a white tanktop through the whole movie. But keeping Biel in a wet t-shirt isnot just a cheap ploy aimed at male viewers, rather it is so thekiller can hear her footsteps as she walks in the puddles. Clever,this one.

R. Lee Ermey is dead-on as the creepy, sadistic Sheriff Hoyt.Hoyt is a major orchestrator in the massacre, a fact our intrepid20-somethings find out too late. Unfortunately, the HistoryChannel’s “Mail Call” will never, ever be the same.

Bryniarski is undeniably creepy as the sadistic murderer.Everyone in the town turns their cheek to his maniacal spree.Apparently, he was picked on during childhood because he had a skindisease that destroyed his face. Hmmm, maybe everyone is mean tohim because he has an affinity for mutilation. Either way, when heis temporarily foiled, Bryniarski ends up looking more like hemissed his audition for “Radio” than a pissed-off psychokiller.

The teens are on their way to a Skynard concert in Dallas whenthey pick up a hitchhiker (Laura German). The kids should haveknown she was bad news – the blood running down her legs and theJessica Simpson level of comprehension should have tipped themoff-but Erin convinces them to take her to get help.

From here on out, the audience is on their own to put togetherthe plot. That is, if they even care about the plot amidst all thehigh-tech gore and camera work.

The hitchhiker protests that she doesn’t want to go “back there”and subsequently swallows a bullet in the back seat of the van.Nispel crosses the line of disgustingly gory here-he’s so far fromthe line, in fact, that the line is a dot to him.

The hitchhiker was apparently kidnapped by the town of derangedfamily members but somehow escaped.

As the story unfolds, it can be interpreted a few ways from thescant clues given during the film.

1) The hitchhiker that was kidnapped had a normal child with oneof the family so they could discontinue the inbreeding. The plothole here: the child in the film is too old for her to have justhad him, as many would have guessed from the blood on her legs.

2) The girl was traveling with her friends and her child whenthey were terrorized by Leatherface and the crazies decided toraise the kid themselves.

3) Chaa, who cares about the story line, dudes are getting theirlegs chopped off! Righteous!

There are a few make-you-jump tactics scattered throughout themovie. However, one classic terror element is missing-scary musicwhenever the killer appears. Jason has the”choo-choo-choo-choo-ha-ha-ha-ha” and Michael Meyers has the creepyorchestral introduction. Leatherface must be feeling left out.

Filled with more dead pig heads than any other horror movie todate, “Texas Chainsaw Massacre” is a gory teenage romp that is sureto disappoint true horror fans, but may be good for one lastHalloween hurrah.