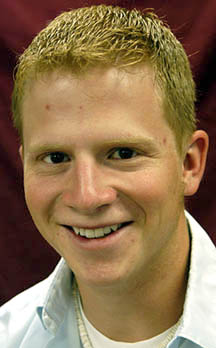 At the risk of being lynched by the administration, thereligious right, killjoys and the usual crowd of dissenters, I amabout to propose a radical idea to solve a growing problem atSimpson College.

The way to control alcohol related problems is through morealcohol.

Let me first say that I am neither encouraging or discouragingnor condoning or condemning the use of alcohol. The question ofwhether to enjoy a libation within the confines of the law is anindividual’s own choice, and one should not succumb to peerpressure from either side when choosing whether or not todrink.

As alcohol pertains to Simpson, there have been several socialblemishes that have reared their ugly woozy head. These problemsare straightforward.

There has been a recent bout of vandalism that has resurfacedsince the introduction of the city ordinance that bannedall-you-can-drink specials at the local bars. The paths ofdestruction can be traced from the square to the campus like asedated whirlwind, causing hundreds of dollars of damage toIndianola homeowners in the neighborhood.

It should be noted, however, that not all of these cases can beproven to be Simpson students, so there is no reason to furthersully the reputation of the student body.

To accompany this, unregistered parties at apartments, themehouses and off-campus housing allegedly become a nuisance toIndianola residents who then call the authorities and report theproblem.

The authorities break up these gatherings and make the crowddisperse, leaving them to wander around campus looking forsomething else to do. Masses roam from place to place, searchingfor a get-together at which they can relax and not be told to movealong.

As these swarms of people dart to and fro, there is the veryreal threat of being arrested by the police. One glance at lastweek’s security log emphasizes this point: four publicintoxications, three possessions under age and two counts oflittering. Yes, the police actually issued tickets forlittering.

There is no doubt that the system is defunct, caused byparticipants on both sides of justice. Shutting down all alcoholrelated events and/or going dry would not solve the problem (*see:Prohibition). Drastically limiting availability also severelydampens morale (*see: State of Utah, Central College). There has tobe a better way.

I propose lifting the ban on all-you-can-drink specials, butputting it on probationary status. In doing so, make sure to notifyparticipants that the powers-that-be will be monitoring the routesto and from campus, on the lookout for hooliganry and ballyhoo.

This will help deter vandalism, promote area economic growth andtake pressure off small, harmless gatherings that are easilycontrollable but could go from fun to hospital if a large crowd ofthirsty people arrived.

If someone fails to see any other reason why implementation ofdrink-special probation would benefit Simpson, look no further thanlocation, location, location. Promoting safe drinking off campusreduces the risk of destruction of our beautiful grounds andbuildings.

To appease students who don’t want to empty their wallet orinhale the equivalent of a pack of cigarettes through secondhandsmoke, the school should allow more registered parties.

There exists a clear and straightforward process through whichan organization goes through to obtain authorization for aregistered party, but simply jumping through the required hoopsdoes not guarantee permission.There should be no limit to theamount of registered parties the campus can hold at one time. Theallowance of such events makes it much easier to regulate than anunruly, inebriated and wandering mob.

Efforts can be made to promote safe drinking habits. Forinstance, Students in Free Enterprise (SIFE) is planning to startthe Storm Cellar, a place where students can get a bite to eat,throw darts and play pool (to name a few highlights). Although noalcohol will be served, as it is affiliated with the college, itdoes serve something even more important to drunks than moredrinks: food.

I believe the bar-related vandalism to be a direct result ofhunger. Food soaks up alcohol, and enough of it can make you tired.Ergo, feeding drunks before they walk home is the perfect way toensure the safety of private property.

Imagine a post-Thanksgiving dinner crowd. Can you picture thesepeople going on a destructive rampage? Of course not; all they wantto do is sleep.

These solutions are all experimental, a little bit radical, andso far unproven. However, there is one surefire way to ensure thetrip from party to party or bar to home to be a safe one: the DrunkBus.

At larger schools like Iowa and Iowa State they have a veryefficient drunk bus. It picks you up where you want and takes youto where you need to go. Best of all, it’s free. The drunk busdrastically reduces drunk drivers on the road at night, and wouldalso cut down on vandalism and pedestrian arrests. I realize thatIowa City and Ames are a little bit bigger, and so the need for abus is more justified. Still…

Why couldn’t Simpson run a smaller version, with a van instead?Call it Stormline, Toasted Taxi or some such. The toll could evenbe as high as $1 and I’m sure students would still get a lot of useout of it, especially in the cold weather. It would show thecommunity that Simpson is committed to promoting responsibledrinking habits, and cares for the safety of its students andresidential property.

This does not have to be a school-run service. Any enterprisingand good-natured student (preferably with a van) could make his orher services known to the campus, include hours of operation and anumber to be reached at.

Therefore, I challenge you, the reader, to answer the call forthe drunk bus! Be the driver, make some money, save some lives.