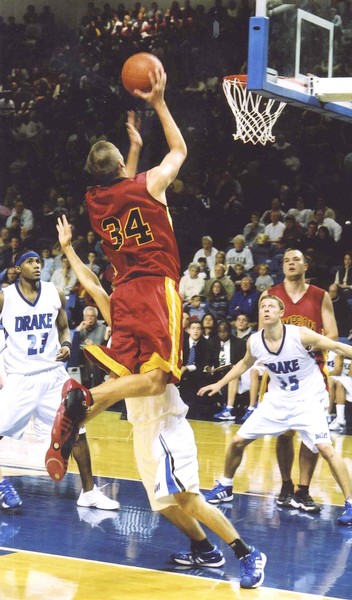 The minute the Simpson Storm men’s basketball team stepped on the court they were the underdogs.

The opposing players are at Drake on scholarship; many of them had probably been recruited by Division I schools long before they could even find Iowa on a map. The Bulldog men are battle tested, playing in the Missouri Valley Conference which produced two NCAA tournament teams last year (Creighton and Southern Illinois). Add to this their off-season acquisition of Tom Davis, one of the winningest coaches in NCAA history, and you have a blueprint for a blowout.

Fortunately, none of this mattered to the Storm, who gave their D-I counterparts all they could handle for 40 minutes. The scoreboard read 87-72 when the buzzer sounded at the Knapp Center, but the 15-point margin didn’t show everything.

It didn’t show Matt Brown pouring in 10 first-half points, while the Drake defenders were trying everything short of a tire-iron to the kneecap to stop him from getting to the basket. It didn’t show Dirk Walker getting trapped by three Bulldog defenders, only to have Walker use the ball like a yo-yo, dribbling behind his back and through his legs to get out of a triple-team. It didn’t show Nick Boyd coming off the bench to lead the Storm with 16 points, including cashing-in on four of four from beyond the arc. It didn’t show Jason Soppe out-muscling and out-hustling the bigger, stronger Drake forwards, grabbing rebound after rebound in his collegiate debut.

It didn’t show Simpson head coach Bruce Wilson’s motion offense that got the Storm more open looks than a peeping tom outside a glass house. It didn’t show the fight.

At halftime Simpson was down by nine to a Division I opponent. They could have folded right then and there, conceding the game to a team loaded with talent and a coach that was leading the Iowa Hawkeyes to NCAA Tournaments when the Storm ballers were still in Underoos.

They didn’t fold. Eight minutes into the second half, Simpson had cut the deficit to five. Twelve minutes in, they were only down by three. After a Tom Davis timeout, the Bulldogs were probably worried about turning their Hall-of-Fame coach’s Drake debut into the biggest basketball flop since ISU was unceremoniously tossed from March Madness by Hampton.

Drake forward Quantel Murphy took over on the offensive glass. Joshua Robinson decided to play lock-down defense on the Storm guards. Even the refs got into the act by giving Lonnie Randolph the “Jordan Treatment,” blowing their whistles at anyone who would so much as cock an eyebrow at the Drake guard.

Some would call it common sense that the Bulldogs would beat a Division III foe at home. Some would say that it was fate that Tom Davis would win his inaugural game for the blue and white. But those who were at the Knapp Center on Nov. 21 would call it pure luck. Luck that Drake doesn’t have to travel down to the Cowles Center this season.