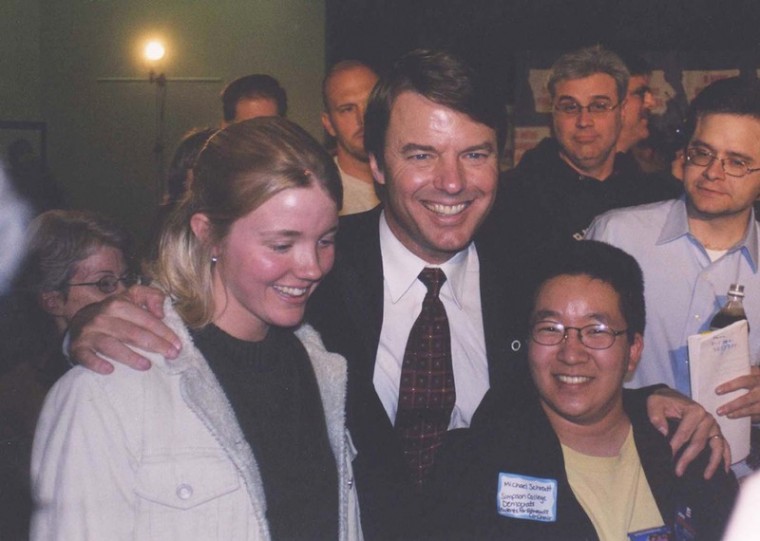 by Mindy Marks and Jasmynne Sloan

Caught up in caucus fever, Dustin Smothers boomed “Edwards!Edwards!” in the BSC gallery Monday night during the Democraticprecinct caucus on campus.

Other students chanted the name of North Carolina Sen. JohnEdwards with Smothers while looking up with pleading eyes to thesurrounding tiers for support among the nonviable groups ofsupporters Dennis Kucinich, Richard Gephardt and Howard Dean.

“I’m kind of disappointed at Simpson College,” said Smothers, ajunior. “I think the students should care more. We as collegestudents could have controlled this election.”

On a night when huge turnouts were evident at caucuses aroundthe state, Smothers was among only a few student faces at the twoDemocratic caucuses and one Republican caucus on campus.

At the Republican caucus in Carver Science Hall, the fact thatPresident George W. Bush is running unopposed for his party’snomination kept attendance down. Only about a half dozenSimpson-student Republicans were there.

“Literally, a good share of students can walk out their door andgo to a caucus, but many of them won’t,” said Epperson. “Some areRepublican and some are truly independent, but for many it’s justtoo much trouble.”

The fact that few students took part in an event ofinternational interest was troubling to Ann Swenson, a senior andsupporter of Edwards.

“We’re so close, and (the students) aren’t here,” she said.”They won’t like the results tomorrow, but they’re not heretonight.”

Statewide, Kerry won 38 percent of the Democratic delegates,followed by Edwards with 32 percent and Dean with 18 percent.

Monday’s caucuses were meetings of local Democrats to selectpreferences for candidates running for president and to adoptresolutions for possible inclusion in party platforms. Presidentialcandidates had to attract at least 15 percent support at a caucusto earn any delegates to the county convention.

“One candidate (Kucinich) voted against the resolution to go toIraq, and we have a moral obligation as Democrats to stay true toour values,” said senior Bryan Johnson Great Hall.

Most of the students in attendance said it was time to take partin the democracy.

“Bush must be defeated,” said senior John Moore. “It’s time forthe youth going into the real world to take an active role ineducating themselves and getting rid of the ‘I don’t care’attitude.”

Along with the Simpson students, a number of faculty and staffmembers supported their candidates.

“John Kerry is a liberal in many ways,” said Walter Pearson,director of adult learning, about the Vietnam War veteran. “If Bushwants to challenge him on patriotism, Kerry will win.”

It was about the elderly couple who held hands at Great Halluntil they were the last supporters standing for Gephardt, who camein fourth statewide and dropped out of the presidential race onTuesday.

It was about the woman at BSC who remained passionate, evenafter caucus leaders turned off her microphone (she did have strepthroat).

It was about Simpson students with glowing faces who cheeredharder at both caucuses than they did at any Storm footballgame.

Edwards, whose surge of support was one of the big stories inthe statewide caucus campaign, may have benefited on campus fromhis visit to Camp Lounge last week. The senator packed more than300 supporters into a room that only holds 200.

“I want to be very clear to every single person jammed into thisroom,” said Edwards. “I came here tonight to ask you to caucus forme. If I could reach out there and grab you, I would.”

“It was exciting for me because you’d never expect all thosenews organizations to be at Simpson College,” said Savage. “Theentire back of the room was lined with camera crews, and it justshocked me to see that.”

Epperson predicted before the caucuses that the turnout at theSimpson event would be a good omen for Edwards’ campaign.

“I think they broke all the fire codes in that room, which iswhat every political candidate would love to do,” saidEpperson.

Edwards spoke about a range of issues to appeal to the students,faculty, staff members and Indianola residents at the event.

“I like how he’s made a conscious effort to appeal to alldemographics,” said junior Erin Gentz. “He has something foreveryone.”

“He’s not being negative toward the other candidates, and he’sfull of hope and optimism,” said Brown. “America is in a badsituation, and we need a president like that.”

“I know a number of people who said he didn’t have enoughexperience and that it was hard for them to imagine him aspresident,” said Epperson. “People have also said he’s the rightguy at the wrong time. They’d vote for him if it were 2008 or2012.”

Garrett Piklapp, president of the College Republicans, said itwas important to pay attention to the likelihood of what thecandidates were saying.

“Some candidates are very vague,” said Piklapp. “They may betelling you nothing about what their platform is or how they’regoing to implement it. With a House and a Senate dominated byRepublicans, the Democratic candidates’ great plans are probablynot going to happen.”

Brown said it is important for students to become involvedpolitically so they can control decisions now and in thefuture.

“If young people don’t get involved, the candidates are nevergoing to address the issues that matter most to us,” saidBrown.