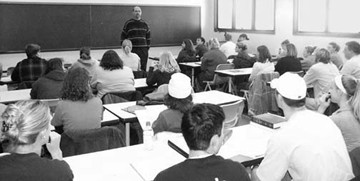 Many Simpson students say some of the college’s classrooms arebursting at the seems in this record-enrollment year, but officialsinsist classes are no bigger than they have been in the past.

Despite these efforts, a Simpsonian review of class sizes at thecollege shows a higher number of class sections with 30 or moreenrolled students than a year ago.

In the spring of 2003 there were 74 classes with 30 students ormore. This spring the total has jumped to 97 classes

“I think that most of my classes for the most part are larger,that is why it is so nice to have a small class,” says junior KatieSkinner in reference to Communications Studies 322, a class of sixstudents.

Jim Palmieri, associate professor of economics, teaches fourclasses this year. Two of them are 100 level economics classes thathave around 40 students. The other two classes are upper level andare much smaller between five and eight students.

Palmieri says he isn’t concerned with the fact that there arefewer students in the upper level classes. Econ 102 can be used tofulfill cornerstone three, causing more non-majors to sign up forthe class. He also mentions that not all classes are taught everyyear or semester and that can also be why classes seem so full.

“I’ve noticed both extremes in regards to class size, saidJunior Tracy Loynachan. “I think it all depends on the demand ofthe course – how often it is offered, whether it is required formore than one major, etc. I don’t think it is an issue of hugeconcern.”

Susanne Gubanc, assistant professor of communication studies,said that one of the problems with different class sizes isadjusting coursework to fit the class. Grading papers and journalscan become overwhelming if there are more students than originallyplaned for. By lessening the amount of work required, students maynot learn as much as they would have in a smaller class.

With a record freshman class of 417 students this past fall,building space is at a premium. Bruce Haddox, vice president foracademic affairs, said the college is planning to create morelearning spaces on campus.

“The old student center can be converted to academic space andthat will help,” he said, but that won’t happen for several years -until enough money is raised for a new multimillion-dollar studentcenter.

In the meantime, classrooms have been carved out of existingspaces in Mary Berry Hall and Dunn Library. College officialscontinue to look for ways to add more classroom space in existingfacilities.

“I don’t think it’s a good idea for us to be going over 35students for a lot of the courses, though we do have to do thatsometimes,” said Registrar John Bolen.

Bolen said the college is concerned about class sizes. Lecturescan have more students, but there isn’t as much participation.

However, labs and discussion-based classes should have fewerstudents, he said.

Bolen is pleased with the average number of students in eachclass.

“In the fall of 2003, the biggest fall we’ve ever had, 88percent of all the courses had fewer than 30 students,” saysBolen.

Included in the number of class sections with fewer than 10students are internships, directed studies and music lessons.