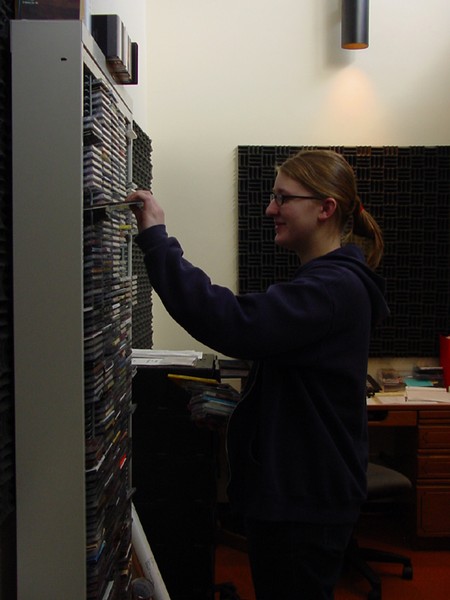 For the past 11 years, KSTM has been offering a place forstudents on campus to find music that they normally wouldn’t hearelsewhere.

“We do play stuff that is more well known, but we also have newmusic that you haven’t heard,” said Neppl.

Neppl said that she likes to play unknown music because itbrings listeners to the station.

“If people want that music, they know where to find it,” shesaid.

Of course with every radio station, listeners, or in KSTM’scase, students, need to be a part of the process.

“We have a bunch of people coming back this semester,” saidNeppl.

One of those returning students is freshman Sarah Harriman, whois also a DJ at KSTM.

Harriman said she enjoys being a DJ because she has always likedmusic and it allows her to express her own personal tastes.

Harriman said there are perks to being a part of thestation.

“If you log enough hours, you get gift certificates to BestBuy,” she said.

Freshman Meghan Disburg is also just starting her secondsemester as a DJ for KSTM. Her favorites are techno and electronicmusic.

Disburg said she was not planning on getting involved with thestation when she came to Simpson, but she saw a booth for KSTM andthought it would be cool. Now she doesn’t regret her decision atall.

What Disburg likes best about the station is her freedom.

“There isn’t anyone telling you specifically what to play. It isvery different than mainstream radio,” she said.

The station is just getting started up again this semester, butKSTM is already planning on continuing an event that they did inconjunction with CAB’s Stormy Nights last semester, entitled “RockReels.”

Last semester the station showed “Empire Records,” a comedy anddrama about an independent music store that is in trouble of beingsold out to a large chain. After a failed attempt to raise money tobuy the store, the employee’s in the movie used revenues from a dayof business to stage a wild party and raise the cash.

After showing this movie, the station gave away the DVD andmovie soundtrack to everyone who came.

Besides music, KSTM broadcasts Storm football and basketballgames, puts out a biweekly e-newsletter, has semi-annual T-shirtdays that are done once each semester and remote broadcasts such asthe one they did in early December at “Dickens of a Christmas” onthe Indianola square.

During this event, the station played Christmas music. Thestation set up, while senior Matt Edwards, station manager, wasback in the studio playing music. KSTM also had contests and gaveaway prizes through the night.

Since the semester has just begun, KSTM’s line-up isn’t clearyet. Neppl stressed that anyone can be a DJ, including professors.She said training is really easy and that students can work as muchor as little as they prefer.