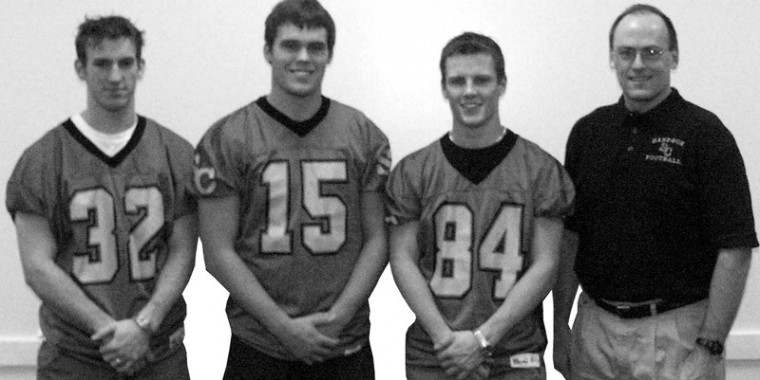 Donnenwerth earned four All-American honors this season. As apunter, he was selected to the American Football CoachesAssociation (AFCA) All-American team and named third team FootballGazette All-American. He was also named honorable mentionAll-American as a quarterback and as a punter on the College SportsInformation Directors Division III All-American team.

The Sheffield, Iowa native came to Simpson to participate inboth the football and baseball programs.

“All the coaches treated me with respect and made it feel likethey wanted me here. Everyone on campus made me feel welcome,” saidDonnenwerth.

“You have 10 other guys out there on the field with you andeverything has to work together to be successful and to make a goodplay happen,” said Donnenwerth.

Every game this season was important but the one that stood outmost for Donnenwerth was the game against Central College.

“We have never beaten them since I have been here. Central tiedthe game in the fourth quarter but we came back to win it. Beatingthem at their place on their homecoming was really exciting,” saidDonnenwerth.

Donnenwerth is the first Storm player since 1998 to be named tothe AFCA All-American team. A finalist for the Gagliardi Trophy,Donnenwerth played in the 2003 Aztec Bowl where he averaged 46.8yards in six punts.

As a Biology major, Donnenwerth has plans to attend medicalschool after he graduates from Simpson.

The 6-foot-3 inch defensive back is from Greenfield, Iowa andwas drawn to Simpson by the football program from the start. LikeDonnenwerth, Westphal has been playing the sport since seventhgrade.

A first team All-Conference selection, Westphal set a schoolrecord for most interceptions in a season with 10 and was third onthe Storm in tackles with 64.

“I love being able to compete,” said Westphal.

Westphal was among the top five in NCAA Division III ininterceptions and passes defended.

“He can cover anybody man to man. We can put him on theopponent’s best receivers and feel comfortable knowing he’ll getthe job done, He’s the type of player that could have a dominantyear as a senior next season,” said Niemann.

One particular moment that Westphal recalls from the past seasonwas finding out the Storm had made it into the playoffs.

“I was with friends and we were sitting around watching TV,waiting to see if we made it or not. It was really exciting whenthey announced we had made it to the playoffs on ESPN,” saidWestphal.

Westphal plans to come back next year and play one more year forthe Storm before heading off to graduate school to study sportsadministration.

“That kind of skill is intriguing to see out of a sophomore. Hepossesses great speed, quickness, and hand-eye coordination,” saidNiemann

The Prairie City, Iowa native not only loves the competitivenessof the game, but also the teamwork that goes into it.

“I love the camaraderie of teammates and friends. It’s a greatfeeling when you all work together to beat the other team,” saidKain.

The game against Coe was a favorite of Kain’s.

“The game was tied and then we scored at the last second. We wonthe conference opener with that victory and it set the tone for therest of the season,” said Kain.

Kain has his eyes set on the national championship in thefuture, and with two more years playing for the Storm, it couldhappen.

Niemann compiled a 9-2 record this past season and after twoyears at Simpson has established a 15-6 record. Niemann echoes hisplayers by agreeing that highlights of the seasons include theconference opener victory over Coe, the defeat of Central at Pellaon their homecoming and the Storm’s draw to the playoffs.

“It had been a few years since Simpson had gotten in the playoffsystem, so it was a memorable moment this past season,” saidNiemann.

According to Niemann, the Storm’s sights are set on winning theconference championship.

“It is within the range of this team and our goals are headed inthat direction,” said Niemann.