Moore does more with his life 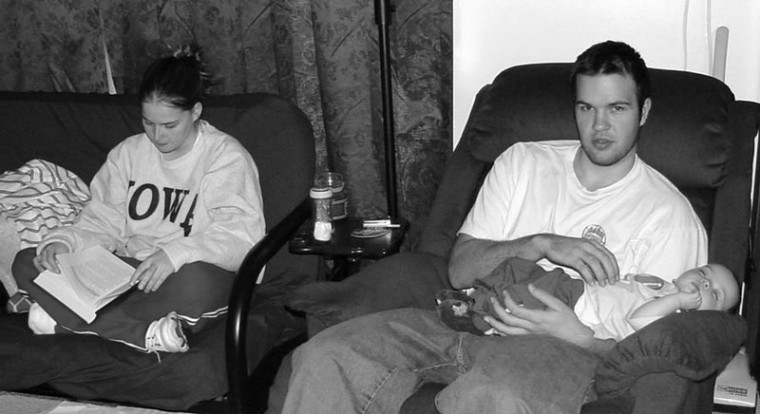 Senior Barry Moore, a starting center for the Simpson Collegemen’s basketball team, is the lead man on and off the court.

Off the court Moore and fiance Janet Jacobs are both full timestudents, working part-time jobs and raising a son. Marcus IsiahMoore was born July 30, 2003 and has only missed a few of hisfathers games.

“Barry has done an awesome job. He’s a great dad, teammate andpartner and Marcus is our man, we have all become surrogate fatherswhen need be and it is a blast,” said coach Bruce Wilson.

Moore transferred from Southwestern Community College last fall.In his second season with the Storm, Moore is averaging 8.9 pointsper game and 5.1 rebounds per game as well as being ranked fourthin the conference for field goal percentage.

“Before I took loses really hard and would get upset after a badgame. Now, as soon as the game is over seeing Marcus thereautomatically cheers me up,” said Moore.

Moore isn’t the only player to have been impacted in this way byhis son.

“Matt Brown had an off game against Dubuque, but after spendingthe night hanging out in the hotel with Marcus he was ready for thenext day and came out having one of his best games,” saidMoore.

Jacobs and Moore are beginning to discover that the challengesof school aren’t the only ones they will face.

“The biggest challenge this far has been balancing academics,athletics and work and still having time for Marcus and Barry,”commented Jacobs.

However, Jacobs said that Simpson staff has been helpful, andfor the most part, understanding of the situation.

“Most people with children are not conducive to being on timefor things and they understand that,” she said.

Moore also works part-time at Menards and agrees with Jacobsthat the Simpson staff has been cooperative and understandable.Moore’s teammates have also been compassionate of the situation.”The guys have been supportive with his responsibilities of thesituation and give Barry total respect,” said Wilson.

Moore’s social life has changed greatly. Unlike most collegestudents who spend money and time with friends on the weekends,Moore spends his time shopping, cleaning or babysitting.

“Having a child forces you to grow up and I would give it upagain, it is a different kind of enjoyment,” said Moore.

As for the future, “I just take one day at a time but eventuallyI would like to do marketing for a sports team,” said Moore.