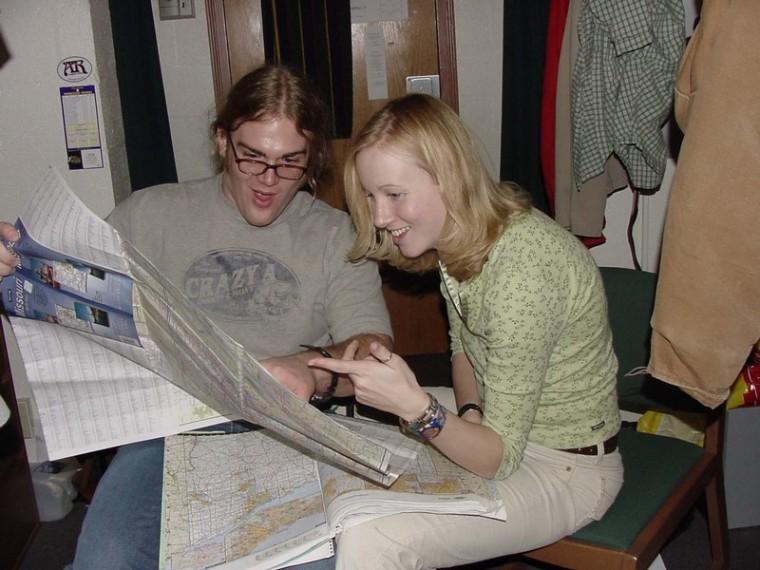 Last year, junior Greg Dolmage was sitting in a Breadeaux Pizzawith some friends. They began to take note of the napkins that hadall the Breadeaux Pizza locations listed in Iowa. They started tocompare the locations each of them had visited.

“Wouldn’t it be awesome to go to all of them,” said Dolmage.

With that said, a road trip was created. Dolmage and sophomoreJordan Oschwald spent an entire week traveling the state of Iowaand visiting a total of 46 Breadeaux Pizza’s. This however was notthe extent of their road trip; along the way they also visited thefarthest corners of Iowa.

“We just wanted to say that we did it,” said Dolmage.

Spring break is a time for travel and many students choose theopen road to get them to their destination.

Deciding on a location is the first step in preparation of aroad trip.

“Tia and I went to www.mapquest.com and zoomed in until we founda city that looked like a good place to visit,” said Ackerson.

They settled on Gulf Shore, Alabama.

“We have never been there and Ryan just got a Geo Metro,” saidLamon. “We wanted to utilize the gas mileage.”

Accommodations also become an issue of interest for thosetraveling.

“I guess we were pretty lucky because we didn’t have anyreservations,” he said.

According to Dolmage finding places to stay with friends andfamily is cheaper.

Hotels and sleeping quarters are on the mind of Lamon aswell.

“We are bringing camping gear and if we have to we will sleep inthe car.”

Lamon and Lieser have checked out books from the library andhave done a minimal amount of research for this trip.

“This is not in character for me, usually I plan things out,”said Lamon.

Some have had great experiences in the past with road trips andare hitting the open road again this spring break. Neve is roadtripping to Panama City, Florida for the second year and Dolmagewill be traveling to Kentucky.

Advice for spring breakers from Neve is not to make plans, pickone place to go and then decide your route from there.