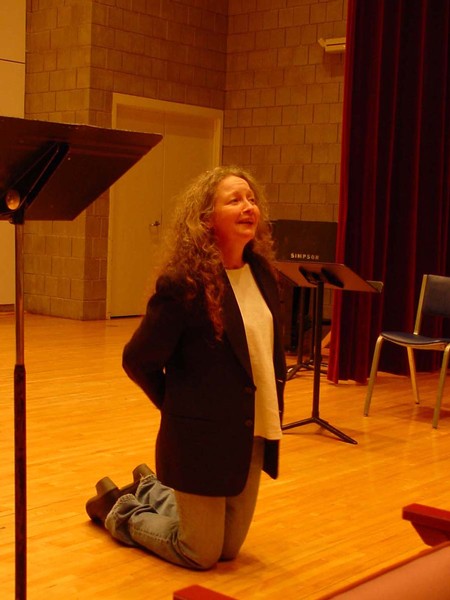 It’s rare for Simpson to host a convicted felon and even askthat felon to speak to students, but the college did just that whenpeace activist Kathy Kelly visited campus.

“It’s true, you’ve got an ex-con in front of you with federalprison time before her,” said Kelly in her speech on Wednesday Feb.11.

Kelly is the co-founder of a campaign called Voices in theWilderness that works to end the United Nations and United Statessanctions against Iraq. As an active member of VitW, Kelly hasvisited Iraq 21 times since the peace group was founded in 1996 indeliberate violation of the sanctions.

However, it is not for her trips to Iraq that Kelly is going toserve three months in a federal prison. She was arrested inNovember for nonviolently protesting at Ft. Benning military basein Georgia.

Kelly remained in Iraq through the bombardment, invasion andoccupation of the country by military forces. She returned to theUnited States from her most recent visit on Jan. 8.

“She didn’t use a lot of quotes and statistics but she did tellus what she saw and what people told her,” said Brettner. “Shedidn’t try to force opinions down our throats, she just let us makeup our minds.”

Marilyn Mueller, professor of management, introduced Kelly. Itwas Mueller’s idea to bring her to campus so that students couldhear a different perspective on the war.

“My hope is that their worldview will be more enlightened afterhearing someone like Kathy Kelly relate her experiences,” saidMueller. “After being in Europe and seeing all the differentsources of news I realized that the mainstream press here does apoor job of giving solid information about world events.”

Sophomore Carl Benskin decided not to go to Kelly’s speechbecause he supports the war in Iraq.

“I figured the whole speech would be an attack against Bush,”said Benskin. “I didn’t want to hear that.”

Mueller said that while Kelly did present the pro-peaceperspective very well, there was little to object to in herspeech.

“Her message is one of peace and love for humankind,” saidMueller. “Kathy [Kelly] gave a very broad view of the situationbased on her own experiences with Iraqis and even our ownsoldiers.”

Kelly and other peace activists stayed in a seven-story hotel inBaghdad with Iraqi citizens of all ages. She discussed theconditions in Iraq during the weeks of bombing raids.

“There was a kind of fatalism from the Iraqis,” said Kelly. “Weall tried to keep a poker face for the kids, but they must havethought it was strange for us to act like nothing had happened whenthe blasts shook the building.”

“I can’t imagine how horrific it would have been for all of themor how terrified the small children would have been,” said Mueller.”We sometimes look at it like a video game, but they lived it andit was clearly a frightening experience.”

“I’m for peace but I don’t know that I would have stayed,” saidBrettner. “She knew the hotel could get bombed. She obviously feltstrongly about the cause, and that stuck with me.”

Benskin said that while peace groups have a place in Iraq tohelp those affected by the war, he doesn’t admire Kelly for stayingin Baghdad during the bombing.

“If you want to you can [stay], but I think it’s stupid,” saidBenskin.

Kelly emphasized throughout her speech that although she’s beentreated badly by soldiers in various situations, she’s also beentreated very well.

“The potential to be kind and thoughtful and intelligent inaction resides in everyone,” she said.

When the U.S. Marines reached the hotel Kelly was living in,they quickly established a relationship with the peace group. Kellysaid this may have been due to the peace group’s satellite TV,which was better than local news.

“We really didn’t get much news, and what we did get wasbuffoonish,” said Kelly. “Who knew what the Iraqi government wasdoing predicting victory.”

Kelly said that Iraqis get three hours of electricity at night,and that many people are moving into the shells of bombed-outbuildings because they have no homes. She also said Iraqi’s wait inline for hours to get fuel while planes fly overhead carrying loadsof fuel to the United States.

She says these conditions are changing the way Iraqis viewAmericans.

“Before when we came back we could never answer the question,’Why do they hate us so much?'” said Kelly. “We were wondering whythey loved us so much. Now there’s starting to be a sense of rageand antagonism from the Iraqis. That’s what war brings.”