To park or not to park? 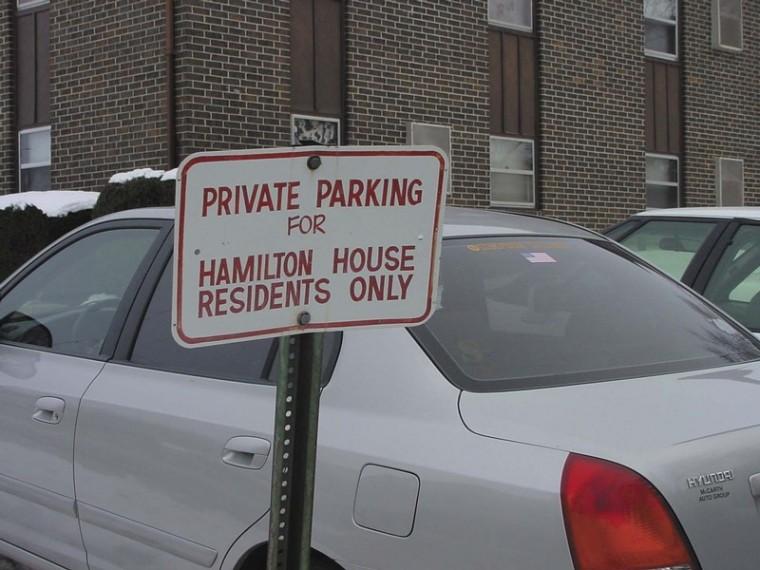 by Andrea McNamara and Kelly Sander

Residents of Hamilton Apartments and parents of IrvingElementary School children are running into a parking problem thatrequires a quick solution.

Senior and Hamilton resident Becky Bausback has had one suchproblem, “I was driving through the backside of Hamilton throughthe alley and I couldn’t get through because there was a parentparked right in the middle of the alleyway. So they had to readjustthe car. I noticed two more cars. They were parked parallel behindthe students’ cars so nobody could get in or out. I thought I wouldinform this parent [parent from alleyway]. I rolled down my windowto talk to this lady. I tried to be as polite as I could. Iapproached her and said, ‘Ma’am, for future reference you cannotpark in this parking lot because it’s only for Hamilton residents.’She got slightly irate and I decided I wasn’t going to deal withthat. So I rolled the window up and kept on going.”

It was reported to Frerichs through e-mails from various,un-named, students that Irving parents were using the Hamiltonparking lot to pick up their kids from school, causing a number ofpeople to be blocked in.

“I’m hoping this can be resolved, but I don’t want this tobecome a vindictive issue between Simpson students and parents,”said Frerichs.

“It’s dangerous for students because the parents park two orthree wide and they don’t let traffic through at some points intime,” said Olinger.

At the same time parents are parking in spots reserved forSimpson students.

“We can’t park across the street on the south side of Irving.We’re not allowed to park there because we’ll get ticketed andtowed. But they can park wherever they want in our Hamilton parkinglot, that’s specifically for Hamilton residents only who haveparking stickers,” said Bausback. “If it was their place ofresidence, I’m sure they’d be annoyed with it as well.”

According to Frerichs, Irving Elementary has been veryaccommodating and understanding.

Irving Elementary will be addressing the recent parking issuewith parents. Principal Craig Sexton was not available forcomments, but according to Frerichs he has been very cooperativethus far.

“If we’re going to solve issues with parking, be it us notparking in their lot or them not parking in ours, we have to berespectful of each other,” said Olinger.

After promptly addressing Irving’s issue of Simpson studentsparking in their lots Frerichs has hopes that they will soonaddress this issue.

“It’s just a matter of being considerate of others,” saidOlinger. “I have some sympathy; they’re just trying to pick uptheir kids. But at the same time, don’t do it on our parkinglot.”