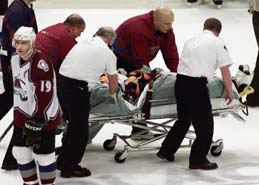 Have you ever felt the urge to throw on some shoulder pads,strap some shin guards to your legs, lace up some skates, don ahelmet, grab a stick, and hit the ice? If so, you’re in luckbecause there is a new club here at Simpson that specializes injust that type of activity. The hockey club was started by seniorAndy Baker and junior Matt Cody.

“I transferred from Cornell where they have a hockey club,” saidBaker. “After talking with some people here who expressed interest,I saw it as an opportunity to form one at Simpson.”

The decision to form the club was made in January and the clubheld a meeting about a month ago for anyone who was interested inbecoming a member.

“I heard about it through the e-mail that was sent out,” saidfreshman Mara Brettner. “I was really excited when I heard aboutit. I haven’t played hockey since the seventh grade and I’m lookingforward to the chance to play again.”

Mara is one of six girls who expressed interesting in joiningthe club.

“The idea was to form a co-ed team and we had about five to sixgirls who want to play,” said Baker.

There were 23 people who expressed an interest in the club butthe members may have to wait till next year to hit the ice. Theclub approached the Student Government Association with a budgetproposal of $3,000 but they were denied the money. According tostudent body treasurer Michael Schrodt, the proposal asked for $975to cover shoulder pads, shin guards, and elbow pads, $600 to coverthe cost of helmets, $450 for hockey pants, $220 for jerseys, $5for a package of pucks, and $1,250 to pay for 10 hours of ice time,which would be rented out at the Metro Ice Rink in Urbandale.

According to student body president Cory George, the reasons forthe Senate’s refusal were because it seemed as though all thedetails had not been ironed out and some things appearedskeptical.

“It seemed as though they were rushing in and there was aquestion of longevity,” said George. “During their presentationthey used language like, ‘If it’s still around in two years’ and sothe Senate was leery about giving a lot of money to a club that maynot be around in two years.”

According to George, SGA suggested that the club come back nextJanuary which would allow them a year to get everything organizedand determined as well as give some players time to learn how toskate.

“Four out of the 23 people had any sort of past experience withhockey,” said Baker.

George said SGA suggested that those members who were in need oflearning to skate could use May term for lessons and practice time.The club has big plans for the future according to Baker.

“We plan on joining the ACHA which contains club level,non-varsity NCAA teams,” said Baker. “We also have the option toform a league with Loras, Cornell, and University of Wisconsin atPlatteville a year or two down the road.”

The hockey club is not the first club to approach SGA with abudget proposal to fund its activities. According to George, twoyears ago the curling club asked for money to pay for their jerseysas well as to fund a trip to the National Curling Conference heldin Wisconsin and they were approved.

“This is the first hockey club at Simpson and the first clubsport since the rugby club folded 10 years ago,” said Baker.

Even though he is leaving next year, Baker hopes to get the cluboff to a good start, adding a new opportunity for students who wishto duke it out on the ice.