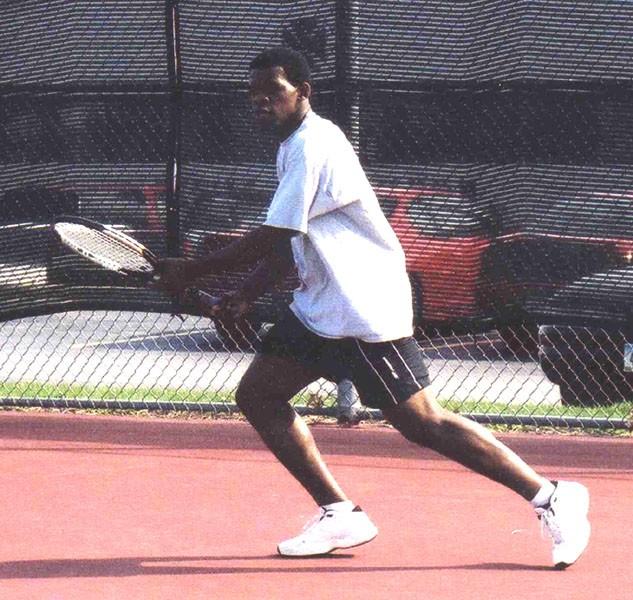 Junior Luc Mbenoun is far from home but he wouldn’t have it anyother way.

Mbenoun is a native of Cameroon and is also one of the stars ofSimpson’s men’s tennis team.

Last year Mbenoun was the Storm’s number one singles playerposting a record of 11-8. He also earned a fourth place finish inthe IIAC Tournament last season and partnered with senior SamSkalland and senior Garret Piklapp as the number one doublesteam.

Even though they were number one in doubles, Piklapp says theyhave improved.

Piklapp attributes the success to a combination of teamchemistry and having fun.

“He’s easy to play with,” said Piklapp. “I enjoy being hispartner quite a bit.”

Part of the success also comes from being patient. Piklapp saysMbenoun is very patient and is rarely frustrated.

According to teammate senior David Venables, Mbenoun’s positiveattitude carries over to the team.

“He always wants everyone to work hard and he motivates theteam,” said Venables. “He wants to make us all better players.”

Venables describes Mbenoun as being very competitive ineverything he does; always carrying a competitive spirit withhim.

It is this drive to succeed and will to win which causes Mbenounto refuse to lose.

“He works hard on fundamentals,” said Piklapp. “He wants to makesure he is better than his opponent.”

Mbenoun is not only patient and positive on the court, but hepossesses many skills as well.

Mbenoun has been playing tennis for 17 years. He prefers to playhere in the states because he says back home the referees aren’tfair and like to call the match the way they want.

Mbenoun loves the competitive spirit of the game and enjoyswinning. He is constantly working on his skills and always lookingto improve himself. In the off season he plays basketball andracquet ball to stay in shape. He constantly performs drills andcontinues to work on them to hone his skills; skills which willcome in handy for accomplishing his goals this season.

“I would like to stay undefeated in conference play,” saidMbenoun. “I also want to win the conference tournament.”

Mbenoun’s singles record currently stands at 10-3. His doublesrecord with Piklapp stands at 4-7. They have some work to do butthey are up to the challenge.

“I enjoy playing with Garret,” said Mbenoun of his teammate andfriend.

Piklapp adds, “We move very well together on and off theball.”

The men’s tennis team conference record stands at 6-2 with anoverall record of 9-5.

The Storm will travel to Wartburg for a conference meet thisTuesday April. 13.