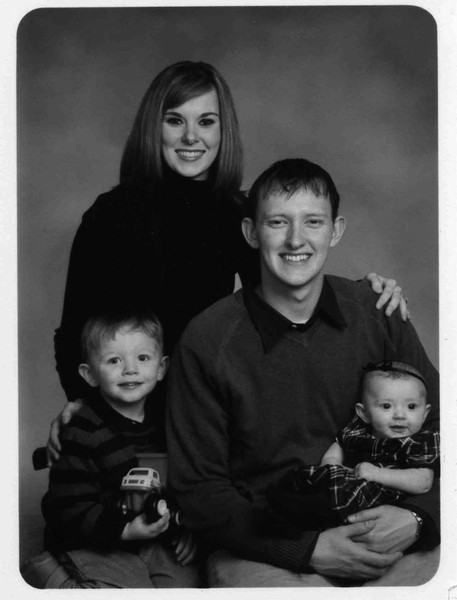 The alarm clock goes off for your 8 a.m. class, but you’realready up because your 3-year-old son Caleb has already wakenyou.

You’re out the door and ready to go to class. Your class isover, it’s 9 a.m. Most students are heading to class or bed, butyou’re 22-year-old J.D. Hews. It’s time for your workout.

Following your weekly ritual for pitching, your next three hoursare spent running, practicing and preparing for this week’sgame.

At last, noon. Time to rest?

Time to hurriedly eat, then go to class … again.

You have 30 minutes to run home, shower, pick up the kids, takethem to the Simpson bookstore for your wife to watch them, thendash to Signatures for work.

You work until 11 p.m. You are J.D. Hews, so it’s time to doyour homework, make sure the kids are sleeping soundly and,finally, go to bed.

It is a day in the life of J.D. Hews, a senior starting pitcherfor the Simpson baseball team, a manager at Signatures restaurantin Indianola, a devoted husband and father of two.

“Every week is an adventure. Every week I have somethingdifferent,” Hews said. “I don’t have time to write things down orget a groove. There’s always an extra babysitter to find, extrahelp needed at work or a sick kid to care for,” he said.

Hews’ busy lifestyle keeps him running. He lives his life as ajuggling act in which each portion gets just the right amount oftime so no one thing hits the ground. But Hews wasn’t always thisbusy.

He spent two years at Kirkwood Community College where he caughteye of Breanne Bailey from Minburn. Noticing the two had the sameparking tag, he asked her for a lift to practice.

“I didn’t want to be late, but I didn’t need a ride that bad. Ijust wanted to talk to her,” Hews said.

The relationship bloomed. Today, their two kids, 3-year-oldCaleb and 8-month-old Meredith, receive much energy from bothparents, but especially the full-time student and baseball starfather.

“There’s always the feeling that you didn’t spend enough timewith the kids today,” Hews said. “But I just don’t have a lot oftime right now, not even for self-reflection.”

Hews’ 23-year-old wife balances time working at the bookstore,being a full-time student and caring for the kids.

“We balance everything together well,” Breanne Hews said.”Things are calm. We keep things together and responsible. I knowit’s hard for J.D. to keep up with baseball and work and not alwaysbeing home. But we always make time at home for him. We also tryand go to his baseball games and support him there.”

On the field, with at least three fans cheering him on, the WestDes Moines Dowling graduate has done a lot. So far this season,Hews has only pitched two games, winning one and losing one.

He has led the team in strikeouts since his sophomore year. Heheld a 4.98 ERA last year. Hews also switches off time as thestarting pitcher and as a defensive replacement in the infield.

“J.D. is a very talented baseball player,” head baseball coachJohn Sirianni said. “The players have tremendous confidence in him.He pitched very well in Florida and made two or three outstandingdefensive plays against Northland, the best team we played downthere.”

Due to his hectic schedule, Hews and Sirianni worked together todevise a plan so he could get his proper workout, while maintaininghis other obligations. The result is Hews performing his weeklypitcher duties in between classes when it isn’t possible for him tomake practice later in the evening.

“He has so many irons in the fire. It’s tough for him,” Siriannisaid. “But we have tried to help him balance all his activities.J.D.’s responsibilities and time tables are incredible.”

With so much going on, it’s not surprising that attributes fromhis off-the-field work would seep into his baseball demeanor.

“You can tell he’s a father figure,” sophomore teammate ChrisCyronek said. “His fatherhood has developed into a certain friendlypersonality on the field.”

Hews’ fatherhood has effected his teammates in other ways aswell.

“The guys on the team are very supportive, they even used tobabysit for me in the Baseball House when I couldn’t find asitter,” Hews said.

Unfortunately, Hews had to quit letting his teammates babysit.He blamed them for his son’s early learning of a few naughtywords.

Hews wishes he could put in the same amount of time intobaseball he put in during previous years, but he knows this year isdifferent. Nevertheless, junior Shawn Parker said Hews works thehardest on pitching as anyone he has ever been with.

“Baseball feeds the fire. It keeps up my competitiveness inschool and in life,” Hews said. “We haven’t had the pitching staffwe have this year. Our expectations have never been higher, and Ithink this is one of the first times we can really fulfill ourexpectations.”

While not on the diamond or at home, his other two commitmentsconsume huge amounts of Hews’ time. The full-time student isworking on a business management major while simultaneously tryingto get his coaching certificate.

Hews said that in the future, he wants to have a leadershipposition either as a coach or in the business world.

“I want to take something out there that has already beeninvented and make it better,” he said.

His major is mirrored through his management position atSignatures. Hews works three nights a week. But like most things inhis life, his hours and days are subject to change at shortnotice.

“The way things are, I just hope to graduate before my son Calebdoes,” Hews said.

But even with all this going on, Hews is hopeful for the future.What he has learned from being a father, a full-time student, amanager at Signatures and a baseball player has culminated into aneducation of its own.

“From all these things, I’ve learned you don’t always have towin to be successful. You find success in relationships with guyson the team, and allowing other people into your life.”