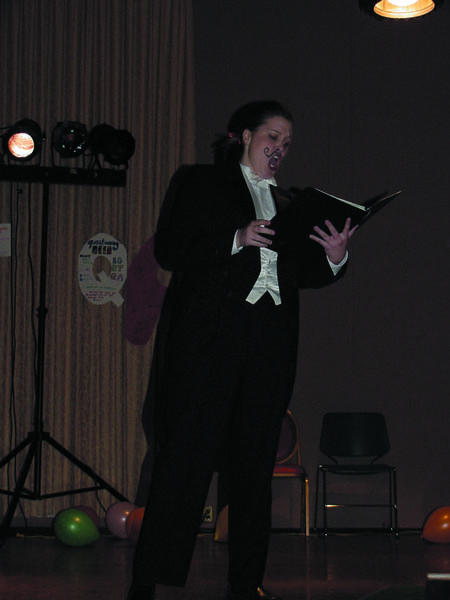 Judges for this event included, Assistant Professor Amy Doling,Associate Professor Nick Proctor and Chaplin of SpiritualDevelopment Angela Gafford. Judges ranked participants’ on a scalefrom one to five in the areas of personality, appearance, talentand question response.

When asking four-year veteran Proctor what he looked for in aparticipants he commented, “Fabulousness!”

Attendance was at a high this year, with approximately 125audience members.

“We really appreciate the support received by the campus on thedrag show but wish it could continue with other activities,” saidjunior president of LGBTQA, Lindsey Ingles. “Support given byallies is the most powerful in the LGBTQA cause.”

This support may have been in correlation to a History classtaught by one of the judges.

One-way of fulfilling a paper requirement for Proctor’s AmericanWomen’s History class was to participate in this event.

According to Proctor his rational for this ultimatum was that 10minutes of embarrassment on stage would give to a degree a sense ofwhat it was like for women making historical steps.

“What female hasn’t wished that a guy could experience the painof shaving legs and wearing high heels?” asked Ingles

“This was different, nothing I have ever experienced before,”said Curran. “If there was no reward I don’t think I would do itagain.”

There were three other Simpson students who participated incontest and two community volunteers performed at the show. Thecommunity performers were Samantha Star and Betty Bomb.

“We have let community members participate because one of ourgoals is more community out reach,” said Ingles.

Freshman Evan Schaefer commented that his first time watching adrag show was, “odd and crazy to start out with but veryhilarious.”

“It was strange but funny at the same time and I saw moves Ihave never seen before,” Goretska said.

The roughly $130 that was raised last year and the money raisedat the show will be sent to the AIDS project of Central Iowa.

“We would have liked to have done better, but we will try againnext year,” said Ingles.