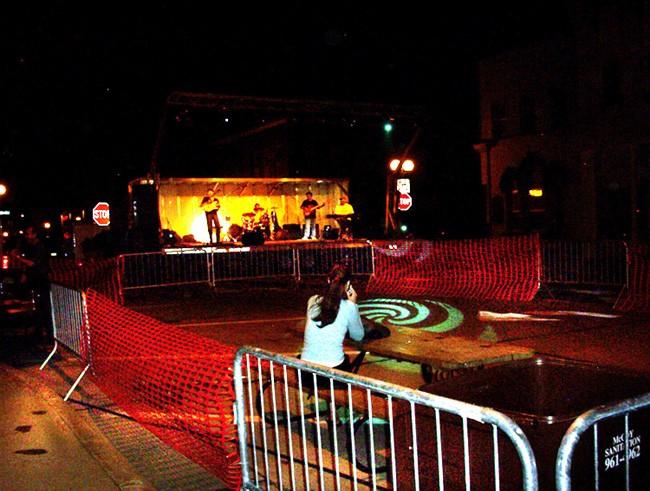 “Welcome to Indianola” the signs read, but really, does thestudent body know Indianola or make an effort to become involved?The events of the weekend suggest they don’t.

Although two bands performed, The Bob Pace Band and Little Mojo,fewer than 100 people gathered on the Indianola square Saturdaynight for the Welcome to Indianola celebration.

“The Welcome to Indianola event started a year ago,” said RichRamos, director of student activities. “The Chamber of Commerceapproached the student government, who then came to CAB, wanting topull students into the community.”

The Nadas, a prestigious local band, highlighted the event lastyear, along with the controversial beer garden. This year,Signatures Bar and Grill provided a small beer garden and abided bythe liquor laws with an enclosed area for those able to drink.

“We participated in the event last year with The Nadas,” saidRandy Gathers, co-owner of Signatures. “This year we wanted to beinvolved again so I made a few phone calls and said ‘Let’s dosomething.'”

Gathers and Ramos agreed that Simpson is an integral part of theIndianola community. The importance of students to the city is whyboth of them have taken the time to get involved.

“Simpson wants its students to get out,” Ramos said. “We wantthe students to see what the square has to offer and to takeadvantage of it.”

With this in mind, where was the student body Saturdaynight?

A turnout of under 100 students, community members, fans andcops – who were spotted sitting at all times – came out Saturday toparticipate in the show that ran from 7-11 p.m.

“One large reason that Simpson is participating in this isbecause we want to let the community know that students are wantingto be part of the community,” Ramos said.

Simpson, Signatures and the Chamber of Commerce have invested avast amount of time and manpower in the success of the Welcome toIndianola celebration.

Due to Saturday’s crowd, it may seem as though neither the townnor the students have an interest in making a connection. The eventwas scheduled for the same day as the Iowa versus. Iowa State game,which may explain the absence of students. The low turnout willaffect the future of the event.

For the time being Simpson would still like to involve studentsin the community. From local volunteering to Christmas caroling onthe square, there will be more events in the future.

“You the students make the decisions,” Ramos said. “Thelogistics are in your hands.”