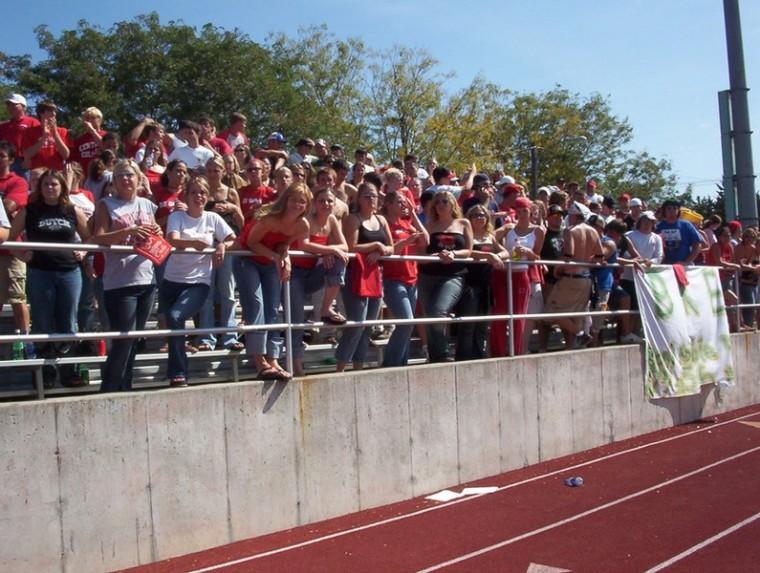 For many years, we have watched as Central and Simpson wagedbattles with each other on the gridiron. But the real hatred spewsfrom the stands each year: the rivalry between Simpson fans andCentral fans.

The animosity between followers of the two teams has risen to afevered pitch at times. Whether it is the chants or the clevert-shirt ideas that students draw up each season, friendships areswallowed whole and the rule book is thrown out the window whenSimpson faces Central.

It was my journalistic duty to cross enemy lines and discoverwhat life was like on the other side of the field with the fans ofthe Dutch.

As I cautiously wandered across to the enemy camp I was alarmedto see several Simpson students had already beaten me across thefield.

“I really hate it over here, I have friends from high schoolthat go to Central, [but the Central fans] are not cool,” onewayward Simpson student said.

I thought to myself, “Is this true, are Central fans really notcool?” I decided to dig a little deeper and uncover the truth.

I stumbled upon a raucous group of Central alumni from 2001. Atfirst glance they seemed cool, but were they?

“Comparing Simpson to Central is like comparing apples tooranges,” one alumnus said.

Wait a minute, apples and oranges? Who is the apple and who isthe orange and which one is cooler? I personally enjoy oranges.Does that mean Simpson is the orange?

“I believe the food in Pella is better, especially Dutchletters,” one Central student said.

“Clogging is a good time, I wear my clogs to class every day,but I didn’t bring them with me today,” one young Dutch freshmansaid.

Following the game I decided to do some investigating on thisactivity called clogging. After browsing the Internet, I made astartling discovery. Clogging is neither cool nor a good time.

I still didn’t have my answer to whether or not Central fanswere cool, so I decided to find the craziest Dutch fan possible.Unfortunately, there wasn’t one; not to my surprise a majority ofCentral’s fans were old people and little babies. There was a smallstudent section set up at the end of the bleachers where I met aCentral student with his chest painted. He was also sporting ayellow foam hat.

“I know we are going to win this game, because they are not goodand we are,” he said. “Simpson fans are stupid.”

Finally I heard the magic word I had been waiting for someone tosay all day long: beer.

“We’re going to go get wasted after the game if we win, but wehave to hide it because we’ll get in trouble,” one studentsaid.

“It is Central High School not Central College,” anothersaid.

At last, Simpson students have something in common with theDutch.