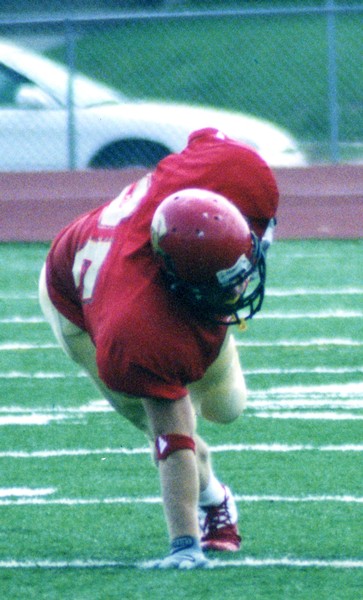 “Central girls are ugly” – or so the T-shirts say – but not asugly as this weekend’s Simpson-Central game will be. This Saturdaymarks the 82nd installment of the rivalry. It will also be thefirst time since 2001 that the game is played in Buxton Stadium.This is the game fans circle on the calendar every year and hopedesperately for a win.

A win over Central is better than any other win during theseason.

“When I was a student, it was a huge rivalry,” said assistantprofessor of physical education and men’s basketball coach BruceWilson. “Every school has a rival, especially in football since youonly play [them] once a year.”

The first football game between Simpson and Central was playedin 1905 – Simpson won 30-0. Since that first meeting almost 100years ago, the Storm has seen its share of ups and downs

While fans are generally rooting for Simpson or Central, somefans have ties to both schools.

Marvin Van Wyk, professor of mathematics and computer science,said that even though he graduated from Central in 1967, he findshimself always on Simpson’s side.

“I’m always delighted when Simpson can beat Central,” Van Wyksaid. “My allegiance is … with Simpson because I teach here.”

Van Wyk added that this rivalry has flourished for nearly 100years primarily because the two campuses are so close together andthere is a strong possibility of knowing students and faculty fromthe rival school.

Senior Anita Zahs sided with Van Wyk on one of the reasons thisrivalry has flourished is the close location of the twoschools.

“It’s one of the closest schools in proximity to us,” Zahs said.”It’s also a tradition and an easy target for us.”

Tradition is also another reason why senior Jamie Cusick seesthis rivalry as a thrilling time for both schools. Cusick, aSimpson volleyball player, gets to see the rivalry on and off thecourt.

“It’s just a tradition thing,” Cusick said. “We’ve always wantedto beat them and they want to beat us.”

This season’s game will leave spectators with memories that willlast a lifetime just like the memories that Wilson, a ’76 Simpsongraduate, has from playing Central during his heyday as abasketball player at Simpson.

“I remember when we went to Central, the fans would surround ourend of the court when we were warming up and harass us,” Wilsonsaid.

No matter what side of the game you are on, it will be thrillingto watch another rivalry matchup between Simpson and Central.

“It always gives a little extra excitement to the game,” Wilsonsaid.