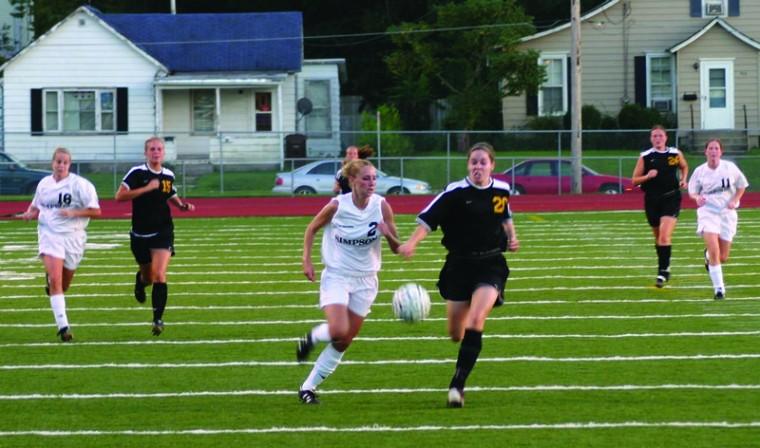 The Simpson women’s soccer team fell to St. Olaf, 2-0, Wednesdaynight in their opening game of the 2004 season.

The Storm had a lackluster first half in which they were unableto generate much of an offensive attack, and were only able to gettwo shots off on goal.

“St. Olaf had tremendous speed, too much to contain at times,”head coach Aziz Haffar said. “They did a better job of controllingthe midfield and we didn’t adjust too well.”

However, the defense kept the team alive and only allowed onegoal during the first half thanks to numerous saves by juniorkeeper Stephanie Shrimp.

The goal came at the 25-minute mark when Lindsay Ruisch receiveda pass from teammate Kelsay Watt from the 18-yard line and slippedit by Shimp.

The Storm did not let the goal get them down as they fought backand prevented any more goals before the end of the half.

The second half proved to be a much solider effort, but did notproduce any offense.

“The second half was our best half,” junior Megan Gallaghersaid. “We were starting to work much better.”

The team worked well together, moving the ball and keeping itaway from Ole defenders, creating several scoring opportunitiesthat the Storm couldn’t quite finish.

“They really put forth an effort and worked hard to get anequalizer,” Haffar said.

The most dangerous threat the Storm posed came when St. Olaf’skeeper, Anna Feigum, attempted to clear the ball but it ricochetedoff of attacking sophomore Ashley Curran, popped over Feigum’s headand dropped in front of the net. Simpson stormed the goal hoping toput it away, but an Ole defender sent it upfield with a deflectionat the last second.

The Oles produced another goal when Kira Price scored,unassisted, from the 18-yard line, putting the score at 2-0 with 16minutes to go in the match.

Despite the two goals scored, Shimp put in a great performanceand made some fantastic saves, twelve when all was said and done,to keep the Storm in the game.

Gallagher agreed, “Shimp was definitely a positive aspect of thegame. She made some great saves and she’s an excellent teamleader.”

The Storm managed just eight shots for the game and no goalsscored. Simpson had no problem creating the scoring opportunities,but they just weren’t able to capitalize on them.

“It just wasn’t our day,” Haffar said. “I think the girls arehungry and we’ll just take it one game at a time.”

“It was our first game playing together so we need to work onplaying as a team more, but we didn’t give up,” Gallagher said.

Even though the season opener did not end in a Simpson victory,the Storm are putting it behind them and turning their attention tofuture games.

“There’s a lot of room for improvement,” Haffar said. “We needto polish up our midfield.”

“We’re all really strong players,” Gallagher said. “It’s just amatter of time and working together and we’ll be fine.”

The women’s soccer team stands at 0-2 after falling to Carletonon Thursday night. Simpson’s next home match is Sunday againstFontbonne.