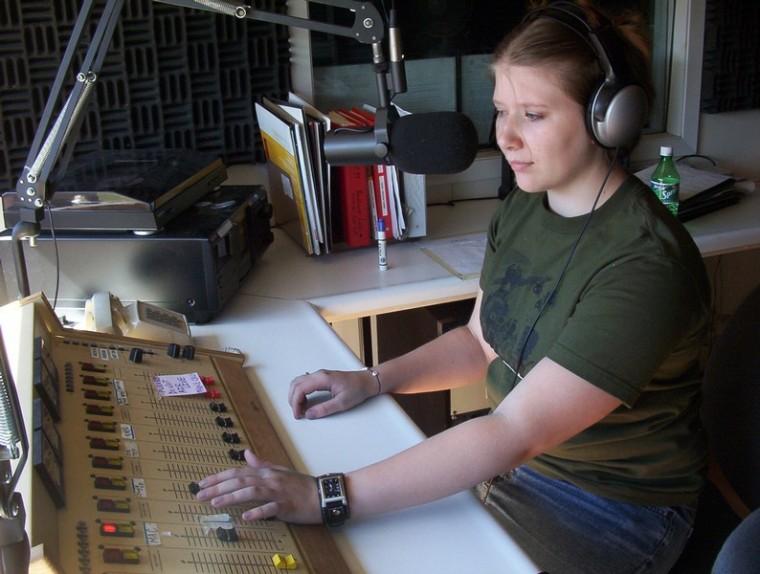 KSTM, 88.9 FM, “The New Storm Radio”, has a batch of new voicesas young disc jockeys take over this year.

“I think it’s great that we have new faces because it’s a wayfor those students to get involved with something on campus,”Harriman said.

After being a DJ last year, she decided to apply for a managingposition.

“It’s a good time, and there are incentives,” Harriman said.”You get to listen to music before it’s released and your friendsare jealous because they hear your voice on the radio.”

“We try to stick to underground music, not mainstream – stuffthat most people don’t hear,” Rauch said.

KSTM is flexible and willing to work around a busy schedule.

“Anybody can and is welcome to do it, even if you are busy withGreek life or theater,” Harriman said. “You can go to the studioand make your playlist, then you get to listen to your favoritemusic and do homework.”

Although the broadcast is confined to a 10-mile radius, thestation is always looking for bright ideas to expand theirofferings.

“Carl and I had vigorous political debates off the air, and wedecided to introduce the campus to a political talk show sincethere wasn’t anything like that yet,” Schrodt said.

Those who tune in should expect disagreement.

“I lean to the left and he leans to the right,” Schrodt said.”If you listen enough, I think you can see where we are both comingfrom. Sometimes we will agree, but most of the time we are onopposite sides of the spectrum. We remain friends despite ourpolitical disagreements.”

Schrodt, who served as station treasurer for the past two years,is excited to see new faces this year.

“I believe that the radio station is open-minded to new ideasfor shows,” Schrodt said. “Although it is predominately a musicstation, I think the new faces will add variety.”

KSTM is ready to serve the students.

“We have a budget. We’re here to accommodate the students. Weare college radio,” Harriman said.

The station is always looking for more DJs. If interested, onecan pick up an application by the studio, which is located on the3rd floor of BSC.

“It’s the door with all the stickers,” Rauch said.

The KSTM mission statement lists several goals for the station.One is to “bring the campus and community the best college radiopossible.”

The mission statement also says that KSTM wants to give indiemusic to a chance in Indianola, help bring more concerts to campus,hold exciting contests and have “tons of music additions eachweek.”

Rauch said the station strives to serve the Simpson community aswell as possible.

“We’re always looking for people’s input. We are here to providea radio station for the college campus,” Rauch said. “It’ssomething we can be proud of.”