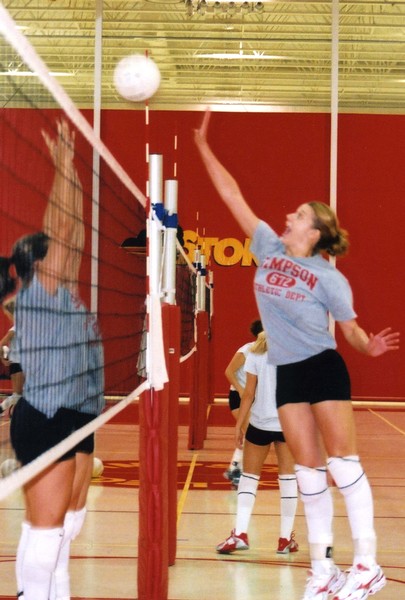 Fans of last season fondly remember cheering on a senior-ledvolleyball team, win after win. Fans of this season might besurprised when they don’t recognize many of the players.

“We are fairly young this year,” head volleyball coach LanaSmith said. “However, a lot of our underclassmen got experiencerotating in last year.”

The young volleyball team was able to mature quickly thanks tothe tough practices against the experienced upperclassmen lastyear.

“All of us have had a lot of court time and know exactly what todo,” junior Sarah Pearson said.

The Storm volleyball team has indeed done exactly what they needto do, since they are currently unbeaten at home. This four-gamewinning streak at home can be attributed to the team’s ability tounite.

“Over the years I have used ROPES, team picnics, and have goneup to the National Guard base to train,” Smith said.

By doing this, the team develops a recognizable bond.

“There is no separation or cliques on the team,” said retunringAll-American senior Shann Stewart. “From senior to freshmen, we allplay together.”

Sometimes this bond can be difficult to achieve since playersfrom all over are used to playing under different coaches and withtheir high school friends.

“We bring in the players right away during camp and show themwhat our system is all about,” Smith said. “Pulling them togetheris key.”

The team may be unified, but isn’t as tall as some of the othersin the conference. However, the team makes up for height withspeed. It also has lots of depth at every position.

There is no doubt that the volleyball team has been able toadapt to the higher level of college play.

“There is an outstanding difference between even the biggest andbest of high schools compared to any college team,” Smith said.

This team has been dominant in the early part of the season witha six-game winning streak, but it still wants to provesomething.

“We have an ‘unfinished business’ attitude after last year,”Pearson said. “The whole team remembers ending last season with aloss and we’ve worked hard to prevent that from happening thisyear.”