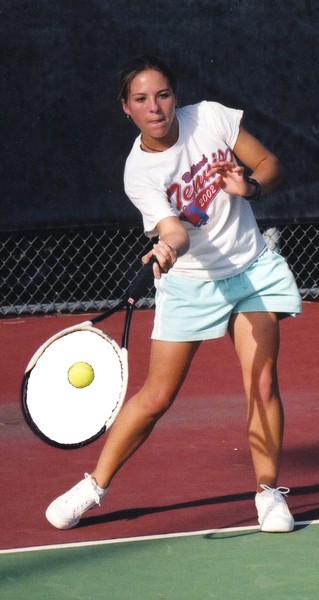 Sophomore Jen Gibson has been an integral part of Simpson’swomen’s tennis team.

She currently holds an 11-3 singles record, 10-2 doubles recordwith partner freshman Martha Davis and helped the Storm to a 5-3finish in the Iowa Conference this year.

“She has a super positive impact on the team and gets along witheveryone,” head coach Bob Nutgrass said. “She’s like the spark plugthat gets everybody going.”

Nutgrass said Gibson’s attitude rubs off on her teammates.

“She’s just a lot of fun to be around,” Nutgrass said. “Theother players see what she does and they want to go out on thecourt and turn in the same performance.”

Nutgrass said Gibson is at a disadvantage when going up to thenet due to her size – it’s easy for opponents to loft the ball overher. This may be her only weakness since the rest of her game iswell-rounded.

Gibson has been playing tennis since her sophomore year of highschool.

“I just started goofing around with [my sister] one summer andfound I really enjoyed the sport,” Gibson said. “Plus I was runningtrack at school and I hated it, so I thought it’d be fun to givetennis a shot.”

Gibson has been playing ever since.

“I love how it’s all just the athlete,” Gibson said. “You’rejust always in your spot and no one else can affect how youplay.”

Gibson says her biggest inspiration is her mom.

“She shows up to almost all my meets and has always had lots ofsupport for me,” Gibson said. “She loves to watch my matches andthat’s a big reason why I continue to play.”

“She’s a pleasure to coach,” Nutgrass said. “She has a realpositive attitude that exudes through the whole team.”