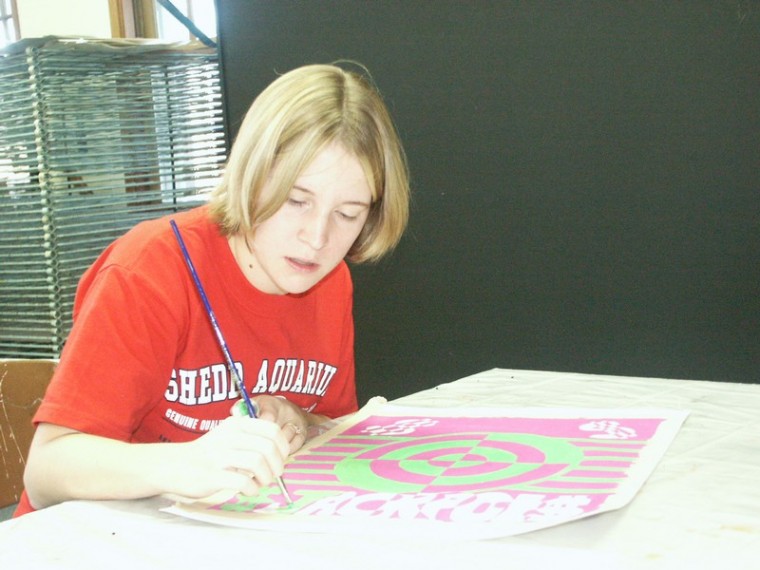 Crystal VanDeCasteele is good. While her professors have been saying she’s a great artist for years, they now have support for their opinion in the United Nations Building.

VanDeCasteele’s AIDS poster is one of three by adults in the United States selected for display in the building.

VanDeCasteele, a senior art major, created the poster in graphic design class for a contest held by the Church World Service organization. Professor Dave Richmond entered it in the contest.

VanDeCasteele’s poster was one of 12 selected, but the contest is broken down into separate categories. Six of the posters are required to be from foreign nations, leaving six available for U.S. citizens.

Of those six, three are set for children and three for adults. So in the end, VanDeCasteele was one of three adult winners in the United States.

This message fits requirement of the contest that the poster do more than describe AIDS. The entries are supposed to send a message against the stigma of the disease.

“The AIDS poster is one of my most satisfying pieces,” VanDeCasteele said. “But I am satisfied with a lot of my work. I don’t think could say that I have a favorite piece.”

“She has strong capabilities,” Nostrala said. “Not only in art and design but in general she is strong. She executes leadership and self-discipline, yet her greatest strength is her ability to manage.”

VanDeCasteele is using her time-management skills to finish her classes at Simpson while she hunts for a job and a home, both of which she’ll need when she graduates in May.

“I plan to move to Chicago,” VanDeCasteele said. “I’m hoping to find an entry-level job when I get there.”

One of VanDeCasteele’s favorite media is a computer screen. Her dream job is creating movie posters and she’s already gotten some experience in the field. VanDeCasteele creates banners advertising theater performances at Simpson .

But when it comes down to it, VanDeCasteele admits she’ll take whatever job she can get. She isn’t focused on a specific, narrow career path. She wants to remain open to any opportunities, including advancing her studies.

VanDeCasteele has learned many skills and lessons as she has advanced as an artist, beginning with crayon drawings as a child and leading up to her recent poster and banner designs.

These skills have helped her in a variety of ways, such as in winning the AIDS poster contest.

Nostrala said it was important for VanDeCasteele to develop as an independent artist.

“I suggested that she set her own standards,” Nostrala said. “If she does this she is able to focus more on her own goals, and not in comparison to others work.”

VanDeCasteele said one thing she tries to do is not take criticism too harshly.

“I have learned from Justin and Dave [Richmond] to not allow others to get me down,” VanDeCasteele said. “I can now take criticism at surface value only.”