The rally: Inside and out 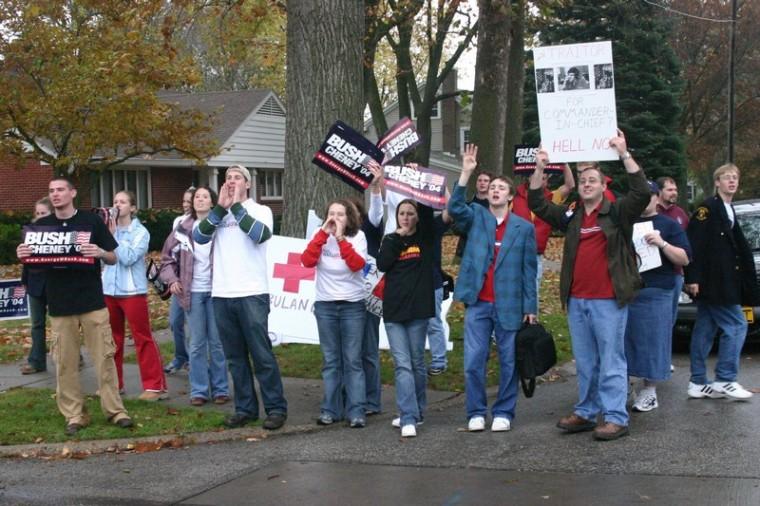 by Kate Paulman and Sara Heim

Junior Kristy Hirsch used to be one of the few, one of thevaluable few, worth her weight in electoral votes.

Hirsch was one of the few remaining undecided voters, eventhough she is a registered Republican. But last Thursday she wasguiding the audience into Cowles Fieldhouse for the John Kerryrally.

Young voters were the focus of the speeches.

DiCaprio told the audience he was there not as an actor orpolitical activist, but as a young citizen of America voting in”the most important election of our lifetime.”

“What we need,” he said as he opened his jacket to reveal aKerry-Edwards T-shirt, “is John Kerry and John Edwards.”

Theatrics aside, Edwards, Vilsack, Harkin and others made sureto cater their speeches to the audience.

Vilsack stressed the importance of college students in thiselection in an interview before the rally.

“I think it’s important to have this opportunity on collegecampuses so that young people understand that they’re important tothe political process,” Vilsack said. “I think it generates a lotof enthusiasm.”

If freshman Ben Williams is any indication, the rally didgenerate a lot of enthusiasm.

“I’m so nervous,” Williams said. “Right before a rally I justget so – errrrr – right in my stomach. I’m just really excited andnervous.”

Bon Jovi’s appearance was announced after it was publicized thatEdwards and DiCaprio were coming.

“I was totally excited before, but then they’re like, ‘And BonJovi.’,” Williams said. “Can it get any better?”

While some came to see the celebrities, the event garnered agood deal of interest from students who wanted to hear about theissues.

Junior Nicki Carlton is a registered Republican, but was at therally because she was still indecisive about who to cast her votefor.

While the celebrity draw didn’t hurt, Carlton said, “I came hereto hear the other side of the issues.”

“I’m a Republican who’s voting for Kerry,” Johnson said. “Ialready voted for John Kerry. I think the current administrationhas taken this country in a direction that isn’t the best, so Ithink it’s time for new leadership.”

Despite her confidence in her vote, Johnson said she wasreluctant to come to the Democratic event.

“I know a lot of Republican-bashing goes on and that’ll be hardto listen to because I am a Republican,” Johnson said.

Assistant Professor of Economics Jim Palmieri said it was notodd to see Republicans at a Democratic rally.

“Anyone’s invited,” Palmieri said. “And in a democracy, that’swhat we want.”

Palmieri also said that having the rally at the college wasbeneficial.

“It’s very important,” Palmieri said. “It gives prestige to theschool, it gets our name out [and] it gets the candidates lookingin the area.”

“I think the story of this election is the fact that youngpeople’s interest and involvement increased dramatically and madethe difference for one of these candidates, whoever wins,” Vilsacksaid. “And when that happens, then people like me who are runningfor office will be compelled to come to places like Simpson, andthat’s a good thing.”

According to Vilsack, college campuses are especially goodplaces for Edwards.

“I think he connects very well with a young audience,” Vilsacksaid.

Students like Hirsch, Williams, Carlton and Johnson prove thatno matter what party students belong to or who they’ll vote for,they have become more interested in the political process.

Between telling people which way to go – “Blue tickets go thisway, ma’am” – Hirsch explained the in-depth process she wentthrough before finally deciding to vote outside of her party.

“There’s a lot of things Kerry supports that I don’tnecessarily,” Hirsch said. “So I had to decide if I was willing tocompromise that or not. I’m not for a lot of stuff he is, but Ithink he’ll be better than Bush.”

Outside: Protestors gather during rally

Controversy hit as students, professors and community membersshared their presidential opinions before the rally lastThursday.

Masses of students, professors, volunteers, and Indianolacommunity members lined up across campus last Thursday to get intothe rally being held by Senator John Edwards.

The Democratic nominee for Vice President appeared on campuswith Jon Bon Jovi and Leonardo DiCaprio as part of a swing throughIowa to campaign for his running mate, John Kerry.

Republican students dressed up and stood outside of Cowlesprotesting the rally.

“We didn’t let a Democratic event go without response,” juniorCarl Benskin said. “People saw the other side of the story, and Ithink that we were effective in that respect.”

Junior Chris Erickson dressed as an ambulance, and sophomoreMakaela King and freshman Ben Low trailed behind him as ambulancechasers.

“The ambulance symbolizes Edwards because he is a trial lawyerand chases ambulances for frivolous lawsuits,” Erickson said.

Benskin said there was nothing wrong with a political rally, buthe didn’t agree with what was being said at this particularrally.

“We aren’t against the rally,” Benskin said. “We are protestingagainst the policies of the Kerry-Edwards ticket.”

Controversy broke out when older members of the community beganyelling at and insulting the protesters.

“Go to hell,” was shouted at the protesters along with”Murderers.”

“It was really surprising that the younger people wererespectful and that the senior citizens were making insults,”Benskin said. “We were just standing there holding signs,”

Benskin responded to the hecklers with, “At least Bush makes uphis mind.”

Other protestors yelled back saying that Kerry was aflip-flopper.

Chris Frerichs, director of security informed Benskin and theother protesters that he had received requests to make themmove.

“We stood our ground and said that we weren’t moving,” Benskinsaid.

Professors and community members alike were impressed by theprotest.

Professor of Biology Pat Singer agreed that it was good forstudents to get involved, but she wasn’t very impressed by theprotesting.

“I think that they should be here, but I don’t think they are avery persuasive or informed crowd,” Singer said.

Based on the number of people who showed up for the rally, Kerryand Edwards might expect a great show of support from the Simpsonand Indianola communities on Election Day, but a great number ofthose in the crowd weren’t there to support Edwards or Kerry.Instead, many were there merely for a chance to see the celebritieswho accompanied Edwards.

These feelings were shared with several students whose solepurpose for attending the rally was the see the celebrities.

“Half of these people aren’t even here to support Edwards,they’re here to see Leo or Bon Jovi,” sophomore Kelsey Conradsaid.

This statement was proven by many students who left the rallyright before Edwards took the stage.

“I think that it’s disappointing that students say they careabout democracy, but the only reason they are going to the rally isto see famous people,” senior Nicole Molt said.