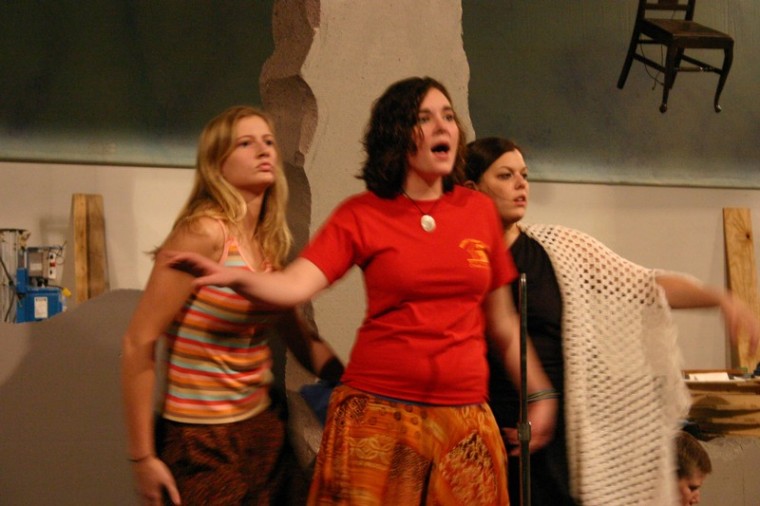 “We’re trying to create a place were buildings have been bombed out with enough ruble and dirt to fill a big space in Pote,” said director and associate professor of theatre arts, Tom Woldt.

That bombed-out look can be hard to achieve.

“The most difficult part of the process was figuring out what it all would look like and helping the other people who were designing to see what I saw in my head,” said senior Rachel Burrows, set designer. “The most rewarding part of the process was to come into the theater every day and see it all come together and be even better than I ever imagined it could be.”

The play tells a tale of aristocratic women’s struggle with becoming slaves following a war that has managed to kill all of the men in their lives.

“In some ways it’s a prisoners-of-war story,” Woldt said.

Although it was written roughly 2,500 years ago by the Greek playwright Euripides, “The Trojan Women” remains relevant because of its subject matter.

“I think it’s a timely piece. It’s about what happens to the victims of war who get left behind,” Woldt said.

Aside from the historic and modern social commentary in “The Trojan Women,” its cast of characters made it a convenient choice for Theatre Simpson’s mostly female company.

“It suits the makeup of our student company right now,” Woldt said. “There are a lot of good roles for women.”

Theatre Simpson’s production will weave music into the plot to help the play be properly translated into a modern context.

According to Woldt, the play will feature a Greek chorus that sing blues, jazz and country western to make it contemporary.

Making “The Trojan Women” appear contemporary proved to be an exciting challenge to the actors involved. Not only was the scenery and music updated, but the actors had to find a way to make their characters balance between the two time periods.

According to Wold, while the era may have changed, the emotion in the play is easily recognizable to modern audiences.

“It’s a very emotional play,” Woldt said, “It deals with a lot of emotional circumstances.”

In a time when the United States is involved in military conflict, this play serves as a way to reinvent ancient socially conscious ideas and questions posed by Euripides.

“I hope people find it an intriguing look at classical literature and how it resonates in the present,” Woldt said.

Auditions for the play were held on Sept. 2, and the cast has been rehearsing both individually and as a group on and off since then.

The 15-member cast is led by junior Becca Jackson, who plays Hecuba, the queen of Troy. However, in the tradition of Greek plays, there are several other key roles in the performance. Freshman Beth Hansen plays Cassandra, sophomore Sarah Harriman plays Andromache, sophomore Lindsey Johnson is the leader of the chorus, sophomore Zach Leiser plays Menelaus and freshman Angela Vogel plays Helen.