Overtime not a blessing for men’s basketball 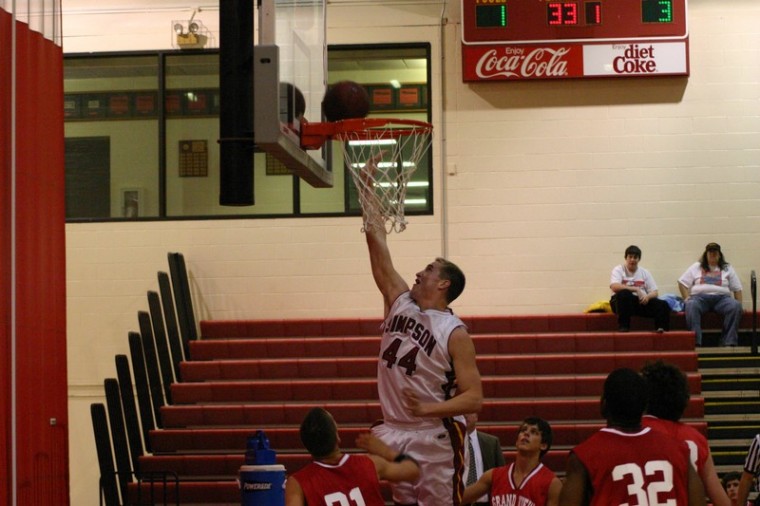 Overtime has not benefitted Simpson’s men’s basketball team. With two overtime losses already in the books, last Thursday night’s game made it three as the Storm fell to Grand View, 82-76.

“We played hard,” junior Scott Ellens said. “We just didn’t execute down the stretch like we needed to.”

Grand View took a 42-37 lead going into halftime, but could have had a lot more points. The Vikings shot 57 percent from the field in the first half, but Simpson held in there with 54 percent shooting.

“We played consistently both halves, but we played well to win the second half,” Ellens said.

That gap in shooting percentage was enough to allow the Storm to out-score the Vikings 34-29 and force Simpson’s third overtime game.

Simpson’s hard work and determined playing brought the game into overtime with the teams standing at 71 points each.

“We did a good job of getting the ball in the post,” Ellens said. “I gave it my best and tried as hard as I could.”

Despite the Storm’s, and Ellen’s, resilience and persistance, the team lost the game in overtime due to just not getting the ball in the basket.

Even though the Storm lost, the team forced Grand View to work hard for its win. Based on the score going into overtime, the game could have easily gone either way.

Leading the Storm was sophomore Ryan Hittenmiller. Hittenmiller collected 21 points with 8-for-12 shooting. Sophomore Jason Soppe helped the Storm by adding 15 points and 15 rebounds. Ellens contributed 12 points to the effort.

Even with its third overtime loss of the season, the team feels hopeful about its upcoming games.

“We need to work on execution, especially near the end of the game,” Ellens said. “If we get that done, we’ll be more successful.”

The Storm currently stand at 1-4 and will travel to Lincoln, Neb. tonight to face Nebraska Wesleyan.