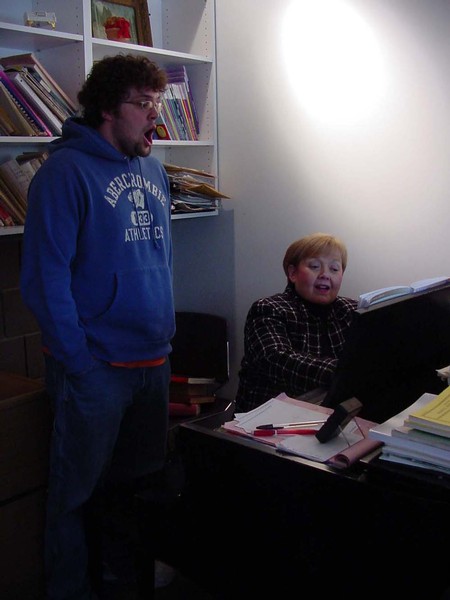 The MONC auditions are held annually in different regions across the United States.

Moore and 27 other performers from the Iowa district vied for the award. They were asked to prepare five arias and perform two of them in front of three expert judges and an appreciative public audience. The pieces they selected were to be from different time periods and by a variety of composers.

Moore said he was glad he had the opportunity to compete in the Jan. 8 event.

“I go in and sing my best and try my best to enjoy it,” Moore said. “I just feel fortunate to have the talent that I do.”

According to Moore, the competitions are not always about the awards or even the money. He also enjoys meeting the other performers and critics.

Moore and two others were awarded $500 and the opportunity to advance to the regional competition in St. Paul, Minn., on Feb. 8.

Music Professor Robert Larsen said Moore is excellent at performing a variety of pieces and understands what he is singing. He believes this is why Moore won the competition this year.

Moore also won the competition last year and went on to the regional competition. Last year he received the encouragement award there.

According to Larsen, Moore’s voice has matured and he has learned how to appreciate the language of the music he performs, so he’s more prepared for competition in St. Paul.

Regionals are very similar to the district auditions. There will be representatives from six surrounding states and a providence in Canada.

The competition only gets tougher from there.

The primary judge is from the Metropolitan Opera in New York and is accompanied by two associate judges. The judges score very rigorously, Larsen said, but he thinks Moore has a chance to win there.

The winner of the regional competition is given an all-expense paid trip to New York. They spend a week under the guidance of the Metropolitan Opera staff and compete in the National Semifinal competition when the field will again be narrowed. The eight finalists are considered the overall winners.

Larsen believes Moore has the ability to create a niche for himself that should help further his career.

“He has just enough faith in himself to make a professional career work,” Larsen said. “He’s just a normal guy with an amazing voice.”

Although the decision was not an easy one for Moore, he looks forward to a career as a professional opera performer. He remained torn between musicals and opera for much of his career at Simpson.

Moore’s next performance will be the lead in the upcoming opera “The Crucible”, which Larsen labeled the most important role in American opera.

“John’s performance in ‘The Crucible’ will leave an everlasting impression on anyone who sees the show,” Larsen said.