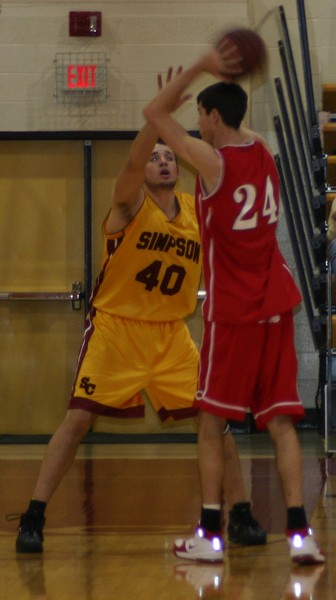 Simpson’s men’s basketball team has been struggling this season with inexperience and youth, but the team is building for the future.

Three sophomores are building the foundation for what could be a very exciting future for men’s basketball: Jason Parkinson, Ryan Hittenmiller and Jason Soppe.

These three underclassmen are seeing substantial playing time and are leading the team’s scoring averages, each with a points per game average in the double digits.

Parkinson, a guard for the Storm, has the team’s highest average with 15.9 points per game. Parkinson said the experience the younger players are getting is good for the team because it can only get better from here.

“We will have a strong group of returners, including four starters this year [who] will be coming back,” Parkinson said. “Combine that with some really good freshmen and sophomores and the possibilities are endless.”

Hittenmiller is the second-highest scorer for the team with an average 13.9 points a game. He also leads the team in steals with 29. Hittenmiller, a forward, said having such a young team could earn Simpson some hardware in the future.

“It means that we have the ability to be one of the best teams in the conference,” Hittenmiller said.

Parkinson, Hittenmiller and Soppe all realize it’s going to take a team effort to succeed.

Parkinson said the team as a whole needs to work on two areas.

Hittenmiller has specific goals for improving his skills.

“One of the things I need to work on the most is my rebounding and on-ball defense,” Hittenmiller said.

While Parkinson and Hittenmiller agree that defense is an area to work on, Soppe is focused on developing some shake-and-bake offensive moves.

“What I need to work on the most is continuing to concentrate on moves and knowing when to use them,” Soppe said. “And free throws always need help.”

While these three athletes are pushing themselves to new levels, Soppe said it will be a complete effort to bring this team to the top of the conference.

In fact, he hopes the whole team can take credit for reaching its goal.

“Ideally it won’t be the three of us or even just a few people that will carry the team,” Soppe said. “Hopefully we will all do our part to carry us where we should be: on top of the Iowa Conference.”