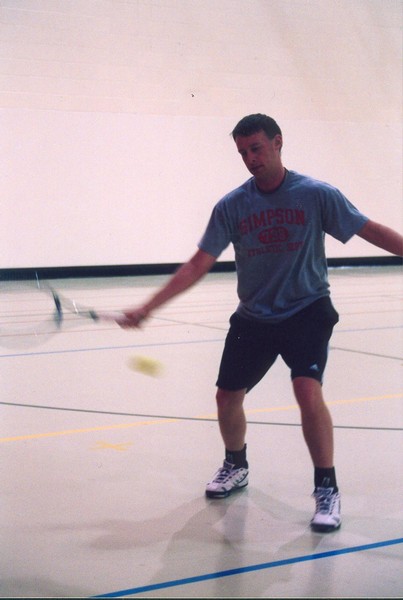 The Simpson men’s tennis team has a lot to deal with in its spring season. There are traditional rivalries, new players to break in and the obligatory areas for improvement.

Coach Bob Nutgrass is optimistic about the upcoming season because there are a lot of elements of the Simpson team to build on from the previous season.

“We’ve traditionally been in the top four or five of the Iowa Conference,” Nutgrass said. “We always go out there and play hard. Two of the things we teach our men are good sportsmanship and work ethic.”

Overall the team seems prepared to take on the challenge of another season, but one thing that makes this season especially interesting is the team make-up.

Officially there are seven men out for the team.

“There used to be eight or nine, but grades and transfers brought us back down to seven,” Nutgrass said.

That group of seven is made up of three seniors and four freshmen. It would be fair to say the team is young, but also somewhat experienced.

Senior Andrew Merrill completed last year with an overall record of 9-11 and is looking forward to seeing what happens this year.

“We’re going to take our young guys and our old guy experience and strike fear into the hearts of our opponents,” Merrill said. “That’s one thing we’re going to work on: intimidation.”

The list of people to intimidate is long. First and foremost is Coe College. The Kohawks have been tennis titans, winning the Iowa Conference for four consecutive years. Pile on the fact that a Coe player has been named MVP of the conference for the last six years.

Coe is the Iowa Conference team to be reckoned with.

Next on the list are Luther and Central Colleges. Both boast impressive records in the conference and are always looking to steal a little bit of wind from the Kohawks.

Simpson finished fourth in the IIAC last year, 12-8 overall and 7-3 in the conference, and is looking to knock off either Central or Luther to have a shot at Coe.

“We’re always looking to break into the top three,” Nutgrass said. “We’ve been battling with Wartburg and Loras for the four, five and six spots for half a decade.”

Last year Simpson beat Wartburg early in the tournament to move on. As far as the Simpson-Wartburg rivalry, tennis seems to be a good bet for a Storm victory.

“It’s always a good rivalry,” Merrill said. “It is always a huge deal to beat Wartburg and we’ve been doing it pretty successfully for a while now.”