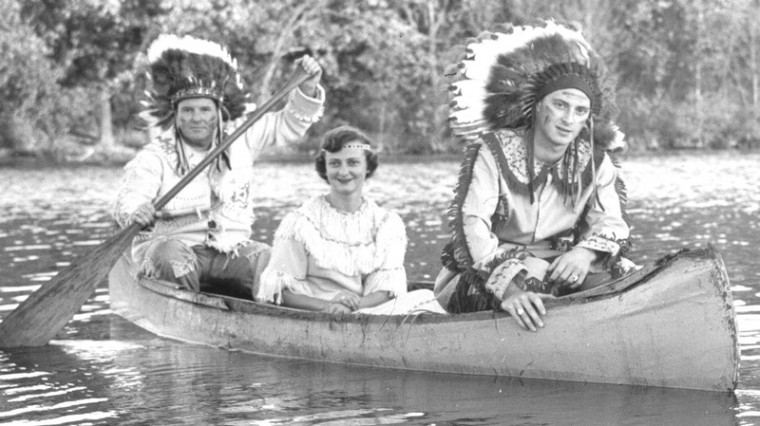 Colleges in the Iowa Conference have nicknames easily associated with each school. The Central Dutch, Coe Kohawks, Loras Duhawks and Simpson Storm are just a few of these familiar nicknames. However, these benign names haven’t always been the collegiate standard.

Simpson wasn’t always the Storm. For many years Simpson’s athletic teams were known as the Redmen and the Lady Reds.

A national debate over the use of Native American mascots began in the 1960s with the foundation of organizations like the American Indian Movement. In the late 1960s the National Congress of American Indians launched a campaign against stereotypes in the media.

The issue gained momentum around the country as protests, and later lawsuits, were mounted against colleges, universities and professional sports teams with Native American mascots. During this roughly 40-year push for tolerance, the United Methodist Church, NAACP, National Education Association, Iowa and United States Civil Rights Commissions and the NCAA called for the examination or elimination of Native American mascots and nicknames.

Charlene Teters, a leading voice in the protest and a member of the Spokane Nation, summed up the movement’s message when she protested the University of Illinois’ Chief Illiniwek mascot.

When she started her protest, she made a simple sign that read “Indians are people, not mascots.”

The debate about Native American mascots may be issue of collateral damage. Spectators sometimes use ethnic slurs or race-related attacks to demean the other team or its mascot. Though intended to mock the other team, these actions simultaneously, though not intentionally, defame Native Americans.

The Redmen, Lady Reds and their accompanying warrior mascot served the college until the late 1960s and early 1970s when Simpson began phasing out the mascot. Changing attitudes deemed the warring Indian an outrageous and racist caricature, and the mascot was slowly replaced by an inoffensive rooster.

The elimination of the mascot was gradual, and Simpson kept the nicknames of Redmen and Lady Reds.

“The administration, over the years, had instructed athletics and other offices on campus that the use of Native American symbols was prohibited,” said Dennis Hunt, then vice president for development and college relations.

According to Michael Adams, assistant vice president and director of public relations, the administration began discussing officially changing the nickname in late 1990.

Adams said the dialogue was based on national research of colleges that had changed their nicknames. The research showed many colleges failed to achieve a community consensus before changing their nickname, which made the transition to a new mascot challenging.

In stark contrast, colleges in which an individual or group made the decision unilaterally were successful in transitioning to a new nickname. Adams said this information was presented to President Stephen Jennings and he decided to initiate the nickname change – and take the heat.

“I was hoping to save Simpson some pain down the road by biting the bullet then,” said Jennings, now president at the University of Evansville. “We were doing extraordinarily well in athletics at that time and I felt it was a good time to change to the Storm.”

By the time Jennings decided to do something about Simpson’s mascot, the protests and media attention on the nickname had reached a fevered pitch.

Yet the decision was a surprise to faculty.

“[Jennings] entered a Cabinet meeting one morning and declared that beginning next year, Simpson College will have a new nickname,” Hunt said.

Jennings attributes his decision to a variety of factors.

“There was no precipitating event inspiring the decision to change the nickname,” Jennings said. “The feeling was cumulatively we had tried to defend the Redmen for generations against the tide of insulting a whole population.”

In the spring 1992 issue of Simpson Magazine, President Jennings made his decision and his motivations clear.