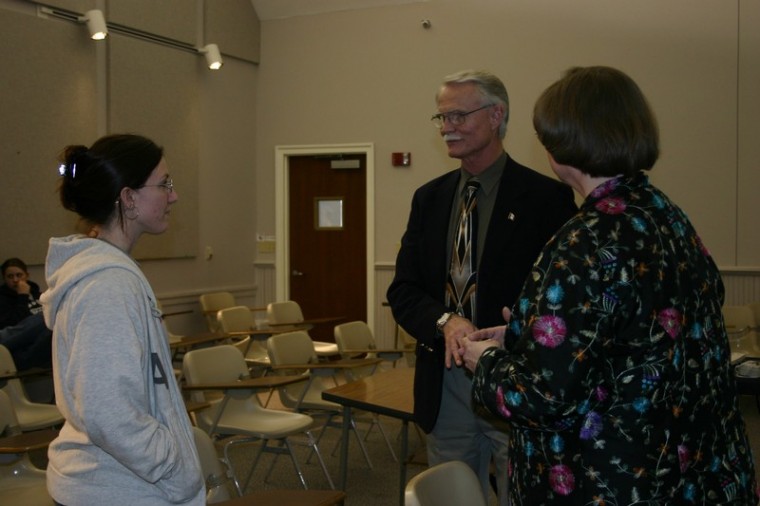 Social science students are coming together in one of the fastest growing groups on campus: Students Working Toward a Better Tomorrow.

“This is the first year we really got it going,” said senior Amanda Springer, president of SWAT. “We’re still new so we’re still getting started.”

Springer was one of many criminal justice, sociology and psychology majors who wanted a group on campus to help them get information and build networks for their careers. Through SWAT she thinks they’ve done both.

“We would like students to hear from professionals who can provide them with some information about what may be expected in their careers and what they can do at Simpson to be prepared for careers upon graduation,” said Roxann Ryan, assistant professor of criminal justice and SWAT’s advisor.

Since last December, the group has hosted inspectors for the U.S. Postal Service, a U.S. attorney and a colonel of the Iowa State Patrol.

For this month’s speaker, the group hosted Darwin Chapman, former director of the Division of Criminal Investigation in Des Moines. Chapman discussed techniques for gathering evidence and emphasized the difference between Hollywood and real life.

SWAT offers students a chance to get information on the field from outside the classroom. Plans are underway to bring in another speaker from DCI, as well as officials from Polk County.

“They bring in a lot of different speakers and a lot of good connections,” sophomore Sarah Clark said.

Students in SWAT and others who attend also have the chance to see the social sciences in action. Last week the group joined Simpson’s Pre-Law Society to tour the Iowa Judicial Building and the Supreme Court. At the end of March they’ll visit a women’s correctional facility in Mitchellville and have an inmate panel. Trips like this have increased the group’s popularity.

“There was going to be a limit of 20 but there are already 30 [who] signed up,” Springer said.

The group also plans on visiting Drake Law School where they’ll have lunch with the faculty, sit in on a class and take a tour of the school. Springer said the group is planning on doing more than just hosting speakers and taking field trips.

“During dead week we’re having a relaxation day,” Springer said. “We might also get together and watch some CJ movies.”

SWAT also plans to take on the issue of funding cuts to youth shelters, specifically the South Central Shelter in Indianola.

“We would like to offer volunteer opportunities for students, either in a service-learning context or as a way to connect with the community,” Ryan said.

Members of SWAT said the group is a great opportunity for them to learn from others and plan for the future.

“We have all the students who have done internships come in and talk about their internships and help each other,” junior Hannah Elkin said. “I knew they would help me after school, finding stuff and getting familiar with different parts of the field I could go into.”