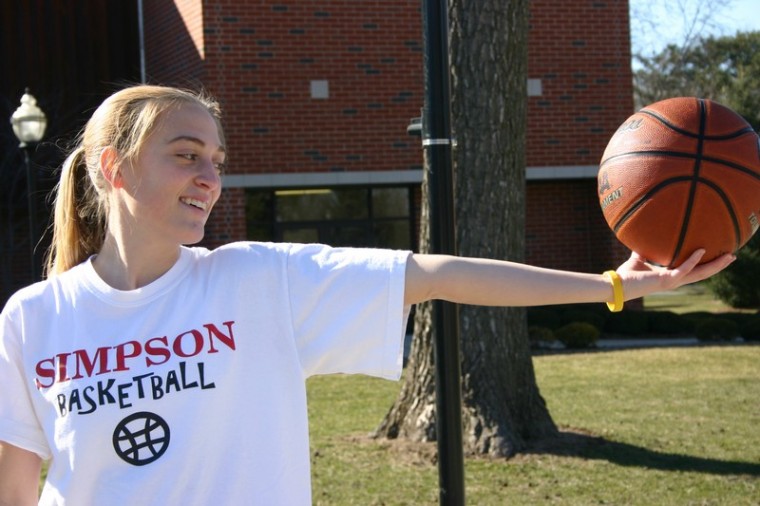 And she likes to steal them from other people. Namely her opponents.

During the 2004-2005 women’s basketball season, Johnson set two new records for the Storm. The record for most steals in a season was previously held by Lisa Cowling in 1999-2000 with 71 steals; Johnson topped that with 74 steals this season. The other record for most steals in an individual game was recorded at eight, and Johnson surpassed that mark on Jan. 6 against Wartburg with 10 steals.

“I just try and anticipate where the ball is going to go, then I steal it, and my team is always there to help,” Johnson said. “We play tough defense.”

A point guard for the Storm, Johnson’s height and long arms have benefited her throughout the season, said coach Brian Niemuth.

“Starting around Christmastime, Dana really started to blossom as a player,” Niemuth said. “She’s tall and her long reach has helped her become one of the best point guards in the conference, and one of the main reasons we did so well.”

On and off the court, Johnson doesn’t let her accomplishments get in the way of team unity and spirit. After she broke the record, her team congratulated her, but, as teammate Ashley Bogaards said, Johnson was as humble as ever.

“We were all very happy for her and cheered for her when we found out,” Bogaards, a senior, said. “She is so giving and the least unselfish person on our team. She deserves this.”

Johnson’s teammates not only provided her with support, but also motivated her to use her long arms for the greater good.

“They make fun of me and say I have really long arms,” Johnson said. “Sometimes when things are tense, or we need a steal, they will tell me, ‘Long-arm power!’ It’s become a joke between all of us.”

Her long-arm power, combined with her speed and dedication have made her a powerful presence on the court.

“Dana has come a long way,” Niemuth said. “She was probably our most improved player, at least for the second season. She just has a great knack for knowing where the ball is going and is able to anticipate its path.”

As for her last year playing for the Storm, Johnson has high hopes of repeating the team’s sweet success. Offseason training, teaching summer camps and playing pickup games are just a few ways Johnson plans to stay in top condition for next year.

“We’re really looking to go back to the NCAA conference,” Johnson said. “We want to be the regular season champions, too. All of that is very possible.”

Whether using her long arms to steal a ball or slap a high five, Johnson’s skills do not go unnoticed by her teammates or coaches.

“She gained a lot of confidence this year,” Bogaards said. “Next year, I think she will gain even more skills and become even more of a scoring threat for our team.”