A Lab to die for 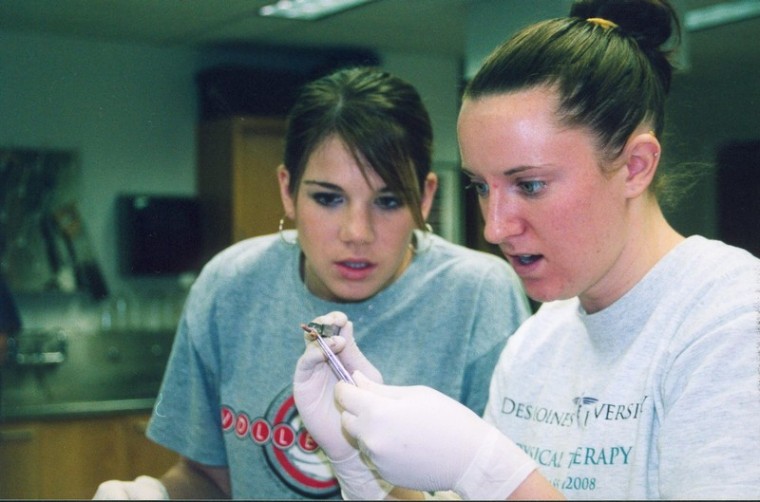 No, sometimes, nothing compares to working with a cadaver.

Cadavers in the basement of Carver Science Center give Simpson students a distinct advantage over neighboring institutions in human anatomical study.

“Most people that go to med school don’t have experience with cadavers before they go,” said Jeff Parmelee, assistant professor of biology.

“The ones we have this semester are in their 80s and 90s … so you see what 80 or 90 years has done to a human body and you see lots of effects of disease,” Parmelee said.

Biology 322 is reserved for biology students as an elective and is a requirement for athletic training majors. There is a strict limit of 24 students per year for the class.

“I don’t want more than six people on a cadaver because there’s not enough room for more than three people working on a side,” Parmelee said. “In the past I’ve had to turn people away.”

The class syllabus outlines a series of exploratory lab sessions, each focusing on a different area of the human body.

“The last section is the head and neck and that’s where we’ll skin the whole face and take out the brain, cut the head in half two ways and see the tongue and sinuses,” Parmelee said.

Students involved with the cadaver lab have several surgical tools at their disposal – along with some common household items.

“The saws we use to cut the pelvis in half,” Lenz said. “We use turkey basters to clean out the body fluids and we use hammers to break open the spinal column.”

Simpson does pay a lot for the use of four complete human cadavers.

“We spent a considerable amount to get those four cadavers,” Parmelee said. “It’s the most expensive course on campus … there’s no way around that.”

Lenz said the cadavers, which arrive on campus during Christmas recess and leave every May term, are essential learning tools.

Parmelee agrees with Lenz that using cadavers is one of the best ways to study human anatomy.

“We’re lucky to have anatomy [class] with cadavers because the alternative, which most colleges do, would be cats or fetal pigs,” Parmelee said.

Dissecting animals for a human anatomy class at the collegiate level is an inadequate substitute, according to Parmelee.

Although they are very detailed, Parmelee said high-tech human anatomy models just aren’t as effective as the real thing.

“It smells a lot better, it’s very clean and the models all have little numbers on them so it’s easy to teach” Parmelee said. “The negative is, it’s a model and no computer program or model can replace the actual hands-on experience of being able to do the dissection, to feel what the organs feel like, to move them to look behind them.”

“The students have 24-hour access, they can go in on the weekend and at night,” Parmelee said. “They’ve all signed a release saying they won’t bring anyone in without asking me permission.”

The cadaver lab is equipped with nine ventilation shafts and a non-refrigerated walk-in storage space for the cadavers when they’re not being examined.

Each time students explore the cadavers, a wealth of knowledge is gained for their future careers because they see the uniqueness of each one, according to Parmelee.

“When they’re later being a physical trainer, physical therapist, athletic trainer or a physician, they’ll realize they can’t just go in and expect certain arteries and muscles to be [in the same place every time],” Parmelee said. “They appreciate that variation.”